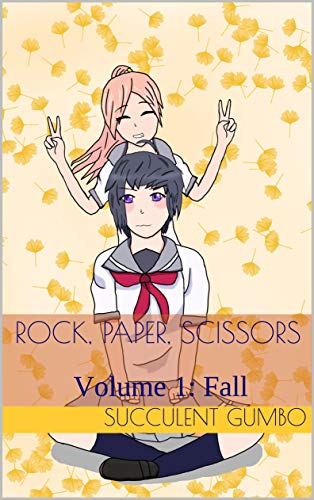 “Please, make me fall in love with you!” Those words would unknowingly change the lives of two girls, who each hold a completely different perception of love itself. Set in modern-day Japan, the story captures the experiences of these two protagonists in a unique first-person account for each of them. Aka Yamamoto is a new transfer student coming from a small city, with nothing more than her upbeat attitude and volition. Sakino Usagi is a known delinquent with a heavy cloud of rumors and misunderstandings following her around.

Yet, despite how different they may seem, they both are searching to find an answer to the same question. What is love? Aka doesn’t recall the feeling of even the slightest skip of the heart, while Sakino ignores her true feelings and hides them behind a lock and key. In a flurry of comedy, romance, drama, angst, and heartbreak, Rock, Paper, Scissors is a story that shows that there is always another side to every story.

Succulent Gumbo has started writing stories ever since a young age. To keep as much anonymity as possible, he prefers not to disclose his real name but has many names he goes by, like Gumbo, Jay, and Eonchi. When he's not writing, he enjoys watching videos, attempting to draw, and playing video games with friends online. When it comes to writing stories, he tries not to limit himself to any genre, as he wants to be able to write as many enjoyable stories as possible.

The desire to write a story of his own is the main drive for creating this book. While he has read manga and novels in the same genre, he wanted to make a story like such, but with his own twist.

How would you describe love? An unexplained phenomenon one experiences when with the person they treasure most in life? A mixture of chemicals released in the brain to induce feelings never felt before? Or maybe, it is simply a game. A label created to place the idea of false endearment inside the minds of many. So what is love? Do people experience it differently? How does it work at all? I had never known and possibly will never know.

I always remembered watching dramas and romance shows with my mom when I was younger. Glorifying romance and love, making it seem like everything was a fairy tale. Is this how my life would turn out? Would I meet someone by pure chance and end up falling hopelessly in love? Something I've seen everyone around me experience, yet something I've never experienced myself.

The feeling of my heart racing too fast to comprehend. Every word wanting to leave my mouth becoming stuck on the tip of my tongue. The subtle and gentle heat on my face radiating constant warmth but never leaving. Would I ever feel any of that? Sure, I'm young and there's still much I have to experience in life, but maybe. Just maybe. One fateful day, I'll come across a person who'll change my life forever. I had a feeling.

"Aka, wake up! You'll be late for school." Late? School? Yeah, right. Slowly opening my eyes, I glanced over at my chubby cat alarm clock, seeing the large numbers imprinted across the screen. Eight twenty-five. Twenty-five minutes before morning assembly. It was just a nice walk down the street, and I'd be there. Plenty of time. Letting out a slow yawn, I snuggled back up into the covers, before whatever sleep I had was completely edged away by the sudden realization.

I had moved homes last week. This was a new school. A school that was twenty minutes away if I walked. Jumping out of bed, I quickly made my way to the closet, relaxed being the last word I'd use to describe myself. Five minutes to get ready? Yeah, right. This was my first week at a new high school, I had to give a good impression! But what was better, looking good, or showing up on time? Could I manage to do both? Oh jeez, this was making my head hurt.

Quickly putting on my school uniform, I took a few moments to comb my hair, tying the pink hair back into a ponytail. Moments later I undid it, unsure of what hairstyle would look best. Better to leave it as it was, then. Rushing down the stairs with my book satchel, I grabbed a piece of toast, hugged my mom goodbye, then made my way out of the apartment. Oh, today was such a nice day! The sun was out, there was a cool winter breeze, and the city was bright and lively. It didn't get much better than this. Now I just needed to make it to school on time, and everything would be great! I could just feel it!

Skipping down the street, I couldn't help but be transfixed by the scenery around me. The city was truly wonderful and lively, at least more interesting than the small town I used to live in. Maybe this is what mom meant when she said not to get too distracted. Right, getting to school was my priority. Turning back to look at where I was running, I let out a small sound of surprise as I crashed into someone in front of me. Smelling the faint scent of lavender as I crashed onto the ground, I looked up at the hooded figure with wide eyes, my eyes meeting a pair of purple ones. Weird. Standing up and dusting myself off, I made sure my uniform wasn't damaged or dirty. Thankfully, it wasn't.

"Hey, are you al-" Was all I could say before I realized the person was long gone, seemingly having run off. Weird. Since I was in a rush, I didn't give it much thought as I continued my trek to school. After all, I would probably never see that person ever again.

"Aka Yamamoto, a first-year transfer from Taiyo. Since it's your first week, I'll let you off with a warning. Please try to be on time." Bowing, I turned and left the office, clutching the straps of my bag tightly. Looking down at my printed, unorganized schedule, I did my best to navigate the large campus. Coming from a small school in a small town, there were still a few things about the city I had to get used to, school being one of them. The nice lady at the front told me there would be a guide, but I didn't see anyone-

"Ah, so you're the first year I was told about." Eh? Feeling the large hand pat my head, I turned around, glancing up at the boy who stood before me. Was he that tall, or was I that short? There was a kind smile on his face, but the bright lights with his even brighter hair were quite an eyesore. Despite that, I mustered a smile and a bow. It seems like I found my guide.

"Wah, you're really two meters tall?" I exclaimed while walking beside the boy. Tokoto Kaori, a third year, and the starting center for the Seijou Academy basketball team. I never understood why seemingly a celebrity at school would be assigned to be my guide, but I still appreciated the help. Yet as we walked, I couldn't help but notice how every pair of eyes present wherever we were, seemed to be turned towards us. It was weird, yeah, but nothing worth mentioning. They were probably just wary of the new girl, that's all. But I had watched enough shows to have suspicions that they were more focused on why the celebrity was with the new girl, rather.

"Since you have class, I'll take you there. If you want, I can show you around campus during lunch. Meet me outside in the courtyard, I'll be there." Nodding happily at his offer, I followed him towards our destination, which was my classroom. It was nice to know that there were welcoming people here. Though it may not seem like much to many, it had me relaxed and happy. Coming to a stop just outside the classroom, I brushed down my skirt, exhaled softly, and stepped inside. It seemed like the teacher was expecting my arrival, as I was ushered to the front to introduce myself. The class size was much bigger than my old school, but I didn't feel nervous one bit.

"My name is Aka Yamamoto, and I'm a transfer from Taiyo Highschool. I'll be in your care." Receiving a warm welcome from the class, I was then given a seat near the back, which I was happy about. Sitting down and unpacking my things, I slowly looked up as one of the students next to me shifted her desk next to mine, before sitting back down.

"Yamamoto-San, was it? I'm Sachiko. I figured I'll share my textbook with you until you receive one from the school." Nodding gratefully at her kind offer, I leaned over slightly to get a better look at the textbook. Though it was difficult to keep up at first, I found myself slowly growing accustomed to the class and material. Yet every time I looked up from my book, Sachiko seemed to be turning away from me. That was a little unusual.

I didn't even realize it was lunch until I heard the tone ring. While packing up my books, I watched as my classmates dispersed into their own groups to eat with each other. It was an odd sight, really. Back in my old town, classes were smaller to the point where it was rather a friend group than a class. Now, there were so many students I possibly couldn't remember the name by name.

"Yamamoto-San. Want to eat lunch together?" Glancing up from packing my bag, I looked at Sachiko who had already packed and had her bento out. I would have been inclined to accept, but I still had to get a tour of the campus from Kaori. So I'd have to decline for today.

"Sachiko-San! Thanks for the offer, but I was planning on getting a tour from Kaori-Senpai during lunch. We can eat together tomorrow!" I said, feeling bad that I'd have to say no. Thankfully she seemed to understand, and then I was heading to the courtyard, just as Kaori said. It wasn't as crowded as the classroom or the halls, which was nice, even peaceful. Taking a slow breath, the momentary silence was bliss, as I finally found myself with a moment to think. This was a new opportunity for me, and it was something I'd have to make sure I didn't mess up. There were mistakes I made in the past, but this was my time to right my wrongs. As I stood there, I didn't even hear the footsteps until they were right behind me.

"Kaori-" I began before I was stopped. Cold, slender fingers gently lifted my chin. Silky black hair. Dark purple eyes. As I looked at the girl who stood before me, I couldn't help but be confused. Did I meet her before? Why was she here? Why was she so close? As I stood there before her, I could then smell the faint scent of lavender.