You are here: Products Rock Hard (Seduced by The Rockstar) #1 by Adriana Hunter 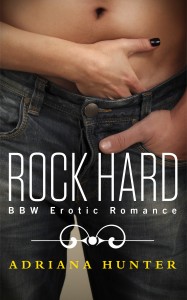 Rock Hard (Seduced by The Rockstar) #1 by Adriana Hunter

Curvy single Kate Preston is about to come face to face with her worst nightmare when she’s forced to interview her college boyfriend, now world famous rocker, Gage Stevens.

Their breakup was a messy one. Kate wanted Gage to ditch the dream of becoming a rockstar for a “stable” job but Gage refused to give up. Years later, his hard work and dedication has paid off with millions of fans worldwide and three album’s going triple-platinum.

With her job as an entertainment columnist on the line, Kate has no choice but to follow through with the exclusive interview. Only Gage doesn’t know that it’s Kate who will be conducting it.

When they meet face to face, sparks fly, and the room is charged with electric, undeniable heat. A mixture of pain and pleasure, where history means something and instant attraction is remembered and perhaps rekindled.

Can Gage look beyond the past and ever see Kate as anything but a cold heartbreaker who abandoned him? Will the plus sized beauty Kate be able to get past her own insecurities to take a chance on the rock God?