You are here: Products Roadstop Romance by D.E. DAUM 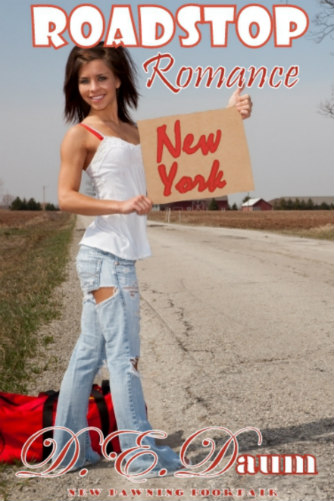 After spending over a year in a homeless shelter, Doty Martinez is ready to try something different. For starters she plans to hitchhike across the country. Leaving her twin sister behind she takes a bus to a nearby truck stop to begin her adventure. After bumming a ride from long haul truck driver Jeffrey Randle, she finds she really finds him interesting.

I like HEA stories and wantedto write a HEA story about a young homeless person.

I didn't know where to start so I started at a truck stop by I-10 and I-15. I was nervous as a steer in a slaughter house, but I forced myself to wander through the cafeteria telling the better looking drivers, "I'm looking for a ride east. Are you heading my way?"
After a half dozen answers from no ma'am to get lost, a very large, decent looking guy in a LA Dodger ball cap with a scruffy three day old beard said, "I can take you as far as Albuquerque, New Mexico if you wanna wait while I take the shower I've been promising myself."
I'd hoped to go further, but Alburquerque was east, so I shrugged. "Better than staying here. Thanks. Look for me when you're finished. If I'm still here when you're done, I'll take you up on it."
He smiled. He had a nice smile even though his front teeth were gapped. It didn't look bad. It fact it made him look endearing. "Okay. It'll take about a half hour. I'll look for you when I'm done." He winked then walked away. Nice tush.
When he was out of sight, I continued my quest for a ride. "I'm looking for a ride back east," I said loud enough to be heard in a ten foot radius. A burly bearded man in his thirties, looked me up and down wistfully from his seat in a booth. He appeared to be interested, but said, "Sorry sweetheart. I'd love to give you a ride, but I'm on my way to Portland." He glanced at to the two guys sitting across from him. How 'bout you guys. This pretty thing wants to go east. Either of you guys heading east? Gene, you're heading east aren't you?"
A non-descript man with a receding hairline and glasses shook his head. "I am, but not until tomorrow. I have a load of tires to offload right now. Is tomorrow too late?"
I nodded. "I'm afraid so. I have another ride lined up, but it's only to Albuquerque. I was hoping to go further."
"Go check out that skinny guy. The one sitting at the end of the counter. He just told me he has a load for St. Louis."
I grinned. "Thanks, I'll do that."
I tapped the skinny guy on the shoulder and he half turned toward me. After looking me up and down, he said, "You want something?"
"The man over there said you were heading to St. Louis."
"And if I am?"
"I'd like to get a ride with you."
He snickered and looked me over again through narrowed eyes. "Do you put out?"
Here it was, my first proposition. I was so nervous I could barely speak. Finally, I managed to blurt out, "Fifty bucks."
He laughed.
I didn't like him.
"What a coincidence. That's what I would charge you for a ride to St. Louis."
I was about to tell him to fuck off when my other trucker tapped my shoulder and said, "Are you ready?"
I turned and looked up at my beefy ride to Albuquerque. Though he'd shaved, I actually liked the previous scruffy look better. I reached my hand out. "I'm Doty Martinez."
My hand looked inconsequential in his, but his handshake was gentle. "Oh, Latino?"
My nostrils flared. Glaring at him I jerked my hand back. "American! Born and raised in East Los Angeles, California, USA!"
He chuckled. "I didn't mean anything by that."
"You're sure?"
"As sure as I am that California used to be part of Mexico."
I laughed. "Sorry, there're a lot of nincompoops around."
He laughed. "Nincompoops? Where did you hear that word?"
"Here and there, but mostly my daddy used to say that."
He bowed his head. "Well, I'm pleased to meet you, Doty Martinez, born and raised in East Los Angeles, California, USA. My name is Jeff Randle. Let's skedaddle."
I nodded and picked up my backpack. "Lead the way, big guy."

Be the first to review “Roadstop Romance by D.E. DAUM” Cancel reply