You are here: Products Ride Me Hard (A Biker Romance Serial) by Shari Slade 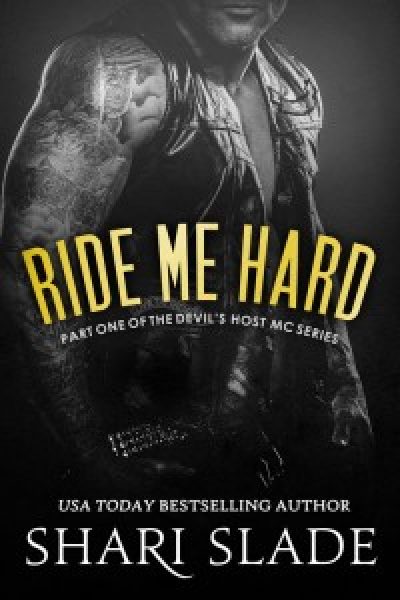 Ride Me Hard (A Biker Romance Serial) by Shari Slade

When a big scary biker shows up at Jimmy’s Diner fifteen minutes before the end of my shift–covered in tattoos and looking at me like I’m on the menu–I should flip the open sign to closed.

I’m too used to doing what I’ve been told. Too used to working and struggling and surviving to do anything different. A closed sign wouldn’t stop him anyway. He’s here to collect a debt. And I’m the only one left to pay.

I can’t process all of him at once. He’s that big. He is scruff and muscle and a white T-shirt tucked into dusty jeans. He looks weathered and road weary, like most of Jimmy’s clientele, but…more. Everything about him is intense. His knife-blade cheekbones. His heavy brows.
His blue eyes flash icy heat, and some animal instinct tells me this man isn’t looking for sass, that if he finds it, he might do something about it, something I won’t like at all.
He’s made himself comfortable in the booth with his leather jacket tossed on the opposite side along with a sleek black helmet. I’m pretty sure there’s a motorcycle parked out front now to match his accessories. If only I’d heard the rev of an engine and the spray of gravel, but I was too busy humming and watching the clock. A warning would’ve been nice. I might have locked the door a few minutes early, even if it did mean Jimmy would dock my pay.
No. I wouldn’t have locked a customer out. But I’d have braced myself better.
His hands are massive and flat on the tabletop. Tattoos crisscross his blunt knuckles, the ink broken by spidery scars. It takes my brain precious seconds to decipher the blue-black loops and whirls as letters.
It’s like he’s put them there for inspection. But not the “clean enough for supper, ma’am?” kind of inspection, the “how much damage do you think these can do?” kind.
A lot of damage. That’s the answer. A lot. Those are knuckles that have been through walls and windows. Flesh and bone.
I want to say we’re closed, but Jimmy’d can my ass for turning away a paying customer. I want to run back to the kitchen and get Harry to tell him to take his business elsewhere, but Harry isn’t any match for this man. And I’m frozen in place anyway. I can’t peel my eyes away from his hands.
I stare harder, and it hits me that the letters over his knuckles form words.
Lost. Soul.
Some fear inside me eases, because that’s almost romantic. Lost souls and lone wolves. Desperadoes. If he were really terrible, he wouldn’t have to advertise. The truly dangerous men blend in.
“Not much of a talker, are you?” he says.
I try for caustic, but the words slip out as half whispers. “Not when I don’t have anything to say.”
He laughs again, only softer this time. More smug. “I can respect that.”
Him respecting anything about me seems like the most ridiculous thing yet. Even sillier than me standing here for long minutes without taking his order. My gaze drifts up his colorful forearms, across his chest, and over the hard pecs I can make out through thin cotton. His neck, corded with muscle and more ink, flexes under my scrutiny.
Everything about him is hard, except for his mouth.
His lips look soft. And pinker than they should be. A sensual mouth, curled into a smile that says I know everything you’re thinking, and yeah you’re exactly right. A smile that says test me, please. A smile that says I’m hungry and you look like cake.
Fuck me. I want to be cake.