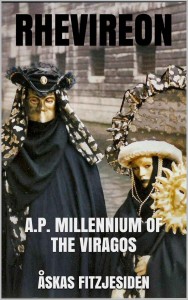 When industrial-banking dynasties reing over North Amaerican society, politics, and religions, ushered in by the House of Beith Brenhams, giving full rein to their undying ambitions, at the height of the Alaskan crisis.

It is the day Juneauton Weltzentrumpoleis rises, that eighteen virgins are chosen, each year they are to be selected from the nine boroughs of Juneauton by the Archmatron, only for the nubiles to be engaged to eighteen Seniors, senior officers in the para-military org Order Overseers Ordo, in one collective wedding, on the Night of the Viragos.

Sixteen year-old Hoyden Vergismeinicht was one; whose sole hope was in Dusk Keiseraef, the young man with an old promise, to never let go of her on the pagan night.

I write under the pen name Åskas FitzJesiden, was born in 15 December 1991; and today I’m two semesters away from earning my BA in Anglo Media studies.

Under fluorescent tubes casting feeble black light that scattered through his irides, gray irides. He laid down, his upper body exhibited before her, across his dorsum, beneath his skin, the ultraviolet-reactive ink glowed, nara black ingredients incorporated, and the extensive irezumi, the incomplet ouroboros tattoo was revealed, as she engraved the self-cannibalist serpent on his flesh with two-coil iron; Hoyden the artist.
‘At times, I’m really afraid.’ She told him.
‘Of?’
‘Winters, winters’ endings, that tomorrow or after, I’ll be kneeling to the altar, to oblivion.’ Gallows humor, kinda joshs circulated around the Weltzentrumpoleis.
‘Worry not,’ Dusk returned,‘you’re too charming for them to be chosen.’ Shamming insouciance, but inside, the perturbance he’d from the thought of Hoyden’s fate for the next five springs, it alone was consuming him from inside. For the instance however, his words could draw a wry smile on her face.
By the occurrence of the March equinox from every year, and until the coming of summer, those were special days for the young women of Juneauton; because during every spring season, fifty-one Maiden, girls between the ages of fifteen and twenty one, were singled out of each of the nine boroughs, with merely eighteen of them would endure as the prospective brides of eighteen Seniors in the Order Overseers Ordo; and part of a long tradition of racial miscegenation, the Fount of Youth festivals.
Intermittently, resonant sirens of the cruisers patrolling the Kazas were heard; and Hoyden drowsed off on his bed, whithout bidding farewell to yesterday.