You are here: Products Revving Her Up by Joy Daniels 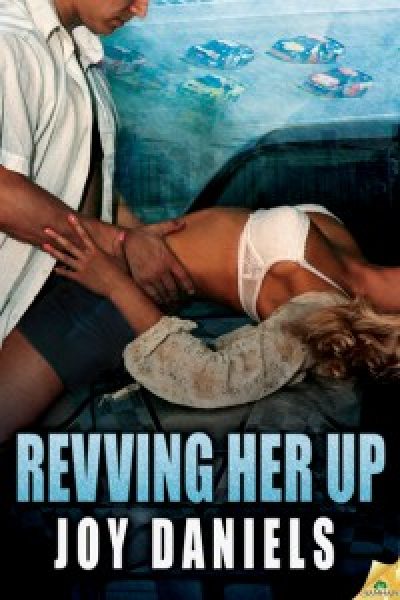 Revving Her Up by Joy Daniels

Her love life is running on empty. And he’s just the man to make her engine purr.

Sarah Lange’s career as a New York lawyer is in high gear—and the stress has left her hormones sputtering. With strict doctor’s orders to relax, she books the cure: a spa vacation in the cool, green mountains of Virginia.

When a pothole sends her Porsche to the side of the road, she finds herself stuck in small-town Rapture. She’d love nothing more than to blow this Hicksville and be on her way…until she meets sexy stockcar mechanic Cole Cassidy.

Coles knows exactly how to handle that fancy car, and its uptight driver. Sarah’s not his type, but neither can deny that their attraction is firing on all cylinders. Soon he’s introducing her to the thrill of speed at the local track—in his car, and on it.

But Sarah’s troubles aren’t so easily left in the dust. Unless she forces herself to decide if she’s willing and able to let someone else take the wheel.

Before turning her keyboard to love and lust, she studied oceanography and spent her days trying to save the world one fish at a time. While the environment is still one of her passions, these days her focus is on writing and growing veggies in the Washington, D.C. area with her scientist husband and two curious kids.

I’m originally from New York City and still a loyal Yankees fan. Since moving south of the Mason-Dixon line, I’ve developed a passion for NASCAR. My debut novella, Revving Her Up, is the first story in the Full Throttle series, which focuses on the bad boys – and girls! – of stockcar racing. It was released by Samhain Publishing in January 2013. After that, a novel set in the capital of country: Nashville, TN. Music City, USA.

The middle of freaking nowhere. Sarah had assumed it was solely a figurative expression. But deep in the hills of Virginia, three hundred miles from New York City and another hundred plus miles from The Spa at Westwood, she’d found it. No reception on her cell phone. No one at the local garage who worked on Porsches. Not even a working soda machine.
According to the sign at the end of the street, the middle of nowhere was officially called Rapture, VA. Sarah snorted. Some name. The only pleasure she’d get from this town was watching it disappear from her rearview mirror.
The cluster of men had thinned, but those who remained stared as Sarah stalked back to her car. She must have looked like some kind of exotic animal to them, her black clothes and high-heeled boots as out of place on this dusty road as the men’s worn jeans and cowboy boots would be in her Manhattan law office. And her car, which hardly signified back home, stood out among the battered pickup trucks and twenty-year-old sedans like a peacock among pigeons.
Annoyed as she was, she didn’t notice that the front end of her car was jacked up until she was practically on top of it. A man’s body stuck out from underneath it, visible from the ribs down.
She stopped in her tracks.
Faded denim hugged narrow hips. The man’s white tee had ridden up to expose abs that were flat and taut. A six-pack instead of the beer bellies sported by the men she’d seen so far. Dark hair gathered into a narrow line that parted around his navel and disappeared beneath his waistband. A brass buckle with an image of crossed racing flags cinched his leather belt. The thought of crossing that finish line made her pulse race.