You are here: Products Revelation by Rebecca Lynn 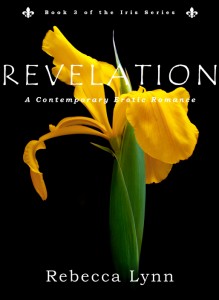 REVELATION, the third book in the Iris series, is a standalone novel filled with humor, friendship, romance and steamy erotica. RELEASE introduced you to Ryann and Jeremy and REDEMPTION continued the adventure of this circle of friends with Ayanna and Jonathan. You’ll love reading the beginning of this sizzling relationship with Mike and Emily in REVELATION! Mature readers only.

Attorney, thrill seeker, and Krav Maga master, Emily White is a twenty eight year old powerhouse. However, she has her own dragons to slay while trying to work through the emotions of past relationships. As a disciplined and serious minded woman, she can’t seem to stop thinking about one flirty charming NYPD detective…especially after he makes it clear he’ll be pursuing her full force.

Detective Michael Callahan is fun-loving, brutally honest and one tall handsome slice of heaven. When Emily defeats him in a self-defense class, he discovers no other woman can hold a candle to the petite and curvy lawyer who puts him in his place so effortlessly.

Michael is determined to teach Emily how to open herself up, not only in life but in the bedroom as well. In the midst of their past and present throwing them into dangerous territory, will Michael be able to teach Emily how to show her vulnerability, or will she choose fear over her potential happiness?

Lynn holds a degree in English Literature with a background in publishing and education. She is now “retired” and enjoys all the spoils of being a stay at home mom. Romance books have been her escape, along with traveling with her husband. She currently lives in Northern California.

Up until 50 Shades of Grey came out, I read lots of fiction but rarely read romance novels. I only pictured romance books with Fabio on the cover. Little did I know that they are so much more! I started reading romance religiously and my husband has cursed the day he bought me my first Kindle in February 2012. Now, all of my reading is for research, at least that is what I tell him.

Once he hit the floor, she was on him, pinning him to the mat.
The adrenaline was pumping like mad at this point and they were both breathing heavily.
“I win,” she said with a grin in between her gulps for air.
Although she was the one doing the pinning, she was questioning whether she had indeed won. His eyes were locked with hers and his stare pinned her even though she was the one on top.
“Yes, you certainly did,” he murmured, also trying to control his breathing. “Congratulations.”
She was currently straddling him with her hands on his shoulders. Slowly, as if not wanting to spook her, his hands came up to rest on the sides of her hips. His fingers began to create slow circles.
She needed to get up, but couldn’t seem to break from his gaze or the feelings he was stirring up with his hands.
The heat was kicking off of him and the realization that he was laying beneath her and between her legs settled into her psyche. She struggled to get up, but he stilled her with his hands on her waist, keeping her where she was.
She wanted to grind into him. She only needed three or four hip rolls to bring herself to a sweet finish, she was that close. Seeing his chest and having her hands on his body was doing all sorts of things to her insides.
“Detective,” she began to say.
“Just let me enjoy this, okay? I don’t know when you’re ever gonna let me touch you again.” With ease, he completely took her by surprise and rolled them so he was on top. He gave her a sweet and innocent smirk that told her he had her just where he wanted her. She struggled and grappled with his hands, squirming to get away.
“Don’t fight me right now, Em. I’m beggin’ you.

Be the first to review “Revelation by Rebecca Lynn” Cancel reply