You are here: Products Restless Spirits by Kathy Bryson 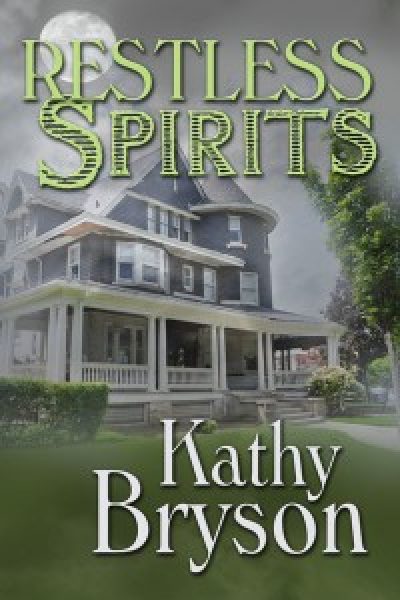 Marilee Harper is desperate to find another job after she accidentally set fire to the home of the richest woman in town. Converting an old hospital into a bed and breakfast seems like a golden opportunity. But faucets and lights turn themselves off and on, and old baseballs fly without help. Stressed and aggravated, Marilee wants nothing more than to redeem herself, even if it means hands off her sympathetic boss!

John Smith has every confidence in the bossy, strong woman he hired to launch his bed & breakfast. She handled difficult customers at the bank and now she’s handling electricity and plumbing and whatever unseen force keeps throwing baseballs. Who can blame him if he starts to admire the woman in more than strictly professional terms? But when the angry, treacherous King of the Fairies shows up, can Marilee become his champion?

Marilee Harper, the main character, comes from the Celtic fairytale, Tam Lin. She is a strong woman who goes to the underworld to reclaim her man who’s been kidnapped by the fairies, braving all sorts of torments and dangers. It’s a nice change of pace to see the woman as the knight in shining armor.

“You hit him with the car?” The doctor blinked at me. “Over a job?”
“I figured it had to be at least a date.” Linda maneuvered a wheelchair up from the back.
“He didn’t offer me a job,” I protested automatically. “And we’re not dating.” I was getting dizzy from all the voices coming at me, but when you’re responsible for backing over someone on his bicycle, you pretty much just have to take the reprimand. Mine was only a token protest.
“He most certainly did offer you a job, Marilee!” Mom screeched. “Just what did you think we drove all the way out there for anyway? Honestly, when someone tries to give you a helping hand, you should . . .”
I was a little surprised at Mom carrying on as she worried about the neighbors, but then Mom was never one to let reality get in the way of a good tongue-lashing.
“Asking someone to paint your house is not a job, Mom,” I argued. I really didn’t want to help anyone paint!
I wouldn’t mind working with tall, dark, and skinny, but just because there was something about the guy that made me sit up and take notice did not mean I wanted to paint. I was trying to find a job that made up for my little arson gaffe. Day laborer was not what I had in mind!
John had looked disappointed. ‘No’ was clearly not the answer he’d hoped for, but honestly, that was the best response I could muster while wandering around Norman Bates’ former digs. I frantically tried to think of a way out of this so-called job that wouldn’t make me look lazy or piss off a potential employer. Word had a way of getting around small towns and, well, given a choice, I didn’t want John Smith to think badly of me.
“No, no,” John called from the examination room. “I’m looking for someone to run the bed and breakfast, to get it all together and then run it.” A muffled thump and some not so muffled curses followed.
As soon as I got Mom someplace private, she was going to get an earful, but right now, I was trying not to hyperventilate or cry. When I could speak, the words came out in a whimper I couldn’t have prevented if I tried. “And you didn’t think this was important to explain earlier, Mom?”
“I did,” my mother stated pointedly. “You didn’t listen.”
“Using the word job is not a good explanation, Mom. Details would have helped.”
“It would have helped if you had just cooperated and made a good impression. You could have asked questions later.”
“Agggh!” This wasn’t an argument I was going to win. Yes, Mom had used the word job, but no, she had not said anything about this particular one. Yes, I had probably not listened, but no, my mother’s plans for me weren’t usually a good match or even a good idea!
A persistent squeak preceded the wheelchair carrying John out of the examination room. The doctor puffed a little as he pushed. John listed to one side. The doctor patted him gently as he turned to the nurse, but John grinned up at me from his lopsided position.
I knew what I needed to do. Faced with the prospect of missing out on a good job when I was one step away from losing my current, there was only one thing to do, and it wasn’t salvage what was left of my dignity. That had been shredded steadily since I first set foot in the car that afternoon. I thought sadly about the cigarettes I’d sworn off. There were still some in my purse, but I wasn’t going to be able to sneak one with my mom around.
“I’m so sorry,” I managed, choking. “I didn’t even know what the job was.”
“Oh,” John’s mouth dropped open, then he frowned. “Oh,” he said again. “I just assumed when I spoke with your mom that, well, we should probably talk it over then.” He gnawed on his lip as if trying to remember something.
“Talk it over? Talk over what? What’s to discuss?” my mother snapped. “Are you telling me you don’t need the job, Marilee? You don’t want to run a bed and breakfast?”
The idea fluttered in my head like a hypnotized moth. Run a bed and breakfast? Actually run something, be in charge of something? On my own, without anyone else to lecture or boss me around? Well, there would be guests of course, but I could make it so beautiful, guests would love it. I could . . . and my heart sank as I saw that dazzling opportunity flutter away. I wouldn’t get to run anything, especially not after I ran over the boss!
“You pretty much have to take the job since you hit him with the car,” Linda commented. “You’d be good at it. You can consider this practice for when a guest gets sick.”
The doctor nodded.
“I would love the job,” I said, and I meant it. “If you still want me, I mean.” I held out my hand and for once, the dramatic gesture actually worked because fortunately John could still shake hands. It was his other shoulder that I broke.