You are here: Products Restless Honor by Deborah Tadema 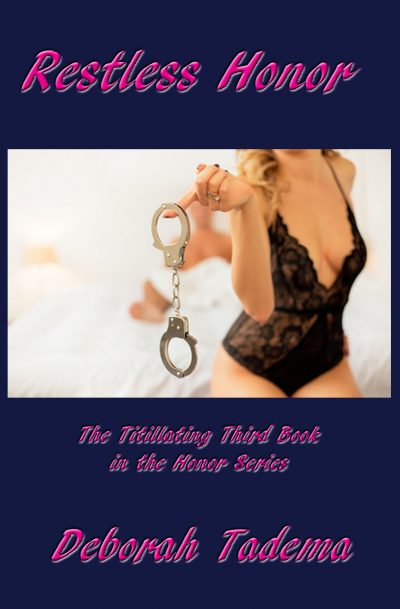 Mitch Wilder vows to steal his wife back, knowing that his quest is futile. Claire knows about his other women; the reason they are separated. He must control his rage against his stepbrother, Tom Fleming, for taking Claire away from him. After all, they have to work together, running their shipping company. But when Tom is kidnapped and tortured, Mitch realizes that he loves his brother.

After Claire Lester-Wilder catches her husband with another woman, she chases after Tom Fleming to get back at him. She thinks that Tom will be easy to manipulate. But she soon finds that she has chosen the wrong man, again. After Tom pushes her away once too often, she runs into the arms of another man.

Tom Fleming hopes that Claire will go back to Mitch. Not because he doesn’t love her, but because of who he is. After he’s sent through hell, Tom finally summons the courage to tell Claire that he is gay. There is only one person he trusts to help him heal and fight his demons, the man he is in love with.

Deborah Tadema received a diploma in “Short Story and Fiction Writing.” Following this, she completed three levels of a creative writing course. She currently belongs to a writing group and has her work critiqued on a regular basis.
Author of: Break in The Wind, Taken Twice, No Honor Between Brothers and Abandoned Honor, Restless Honor. Soon to come, Thunder in The Wind.

Restless Honor is the third book in the HONOR series. It reveals more of Mitch Wilder's secrets. His step-brother, Tom has a stalker who abducts and tortures him. Mitch finally realizes that he loves his brother.

Mitch Wilder sat in his brand new 1969 Ford F250 pickup truck across the street from his hometown diner. Icy patches covered the sidewalk. The street was slushy. He debated whether to go inside, unsure of his welcome there. An entire year had gone by since he was home. He had stayed away to let everything die down, to get better, and to let his heart heal. But yet, it hadn't. His wife was still living with his stepbrother. Mitch closed his eyes and sighed. If it was the last thing he did, he was going to lure Claire away from Tom.
Tired after the long drive from Hamilton, he wanted to relax and have a coffee, maybe one of Bob Marshall’s famous burgers. He studied the diner, new after a fire destroyed it two years ago. There were no apartments above it now, like there were. Mitch thought it was a good thing, he nearly lost a close friend in that fire. Sue lived upstairs then, Bob's wife now, number three. Mitch looked at the new window in the front. It was tinted and he couldn’t see inside. He wondered if it was safety glass. Since Bob owned the place, someone had gone through the window at least three times. Sometimes it seemed there were more brawls in the diner than in the Mansford Hotel a few blocks away.
Mitch sighed again. He leaned his elbow on the open truck window, inhaled the crisp chilly air of late March; and envisioned the last day he was there. A trucker dragged his wife inside the diner. He had found Mitch's watch in their bedroom, the one he had lost several months before. It had his name engraved in it. Now the wife, Diana Smithers, was one of Mitch's mistresses.
Constable Stan Cleary had the guy handcuffed, but the trucker managed to jump through the window. Mitch could still hear the glass shattering into a million tiny pieces. He'd sat back down while Bob and Mitch's son, Darren Hoffman, cleaned up the mess. Then Darren yelled at him and Bob threw a broom at him. He helped to clean up the glass.
Mitch remembered the look on Bob’s face when he read the back of the watch, and it still scared him. It had been a gift from his wife, Sue. “We’re just friends.” Both he and Sue had told Bob many times. But he knew Bob had his doubts. It didn’t help the situation because Bob’s second wife had chased after him like a bitch in heat. Mitch didn't like Julie, and was almost glad when they found her dead.; floating in Lake Erie. Pete Hoffman murdered her, the man who had raised Darren.
Mitch sat back when someone jumped into the passenger seat next to him. His nineteen-year-old nephew, Todd Breckenridge, grinned mischievously at him. Mitch saw how Todd's shoulders had widened. He had also lost all the baby fat on his face. Todd looked more like his mother; Mitch's sister, Nora, than he did even a year ago.
“Nice truck,” Todd looked the inside of the cab over. “Are you going inside, or are you going to sit out here all day?”
“Why aren't you in school?”
“Teacher conference.”
Mitch glanced back at the diner. “You think Bob will beat the shit out of me?” He looked back to see the boy shrug his shoulders.
“Only one way to find out.”
“C'mon.” Mitch tried to sound brave. “I’ll buy you lunch.” He reached for the door handle.
“I already ate. And I should probably warn you, Claire's in there.”
Mitch closed his eyes. “Claire,” he whispered. It took him a few seconds to compose himself and look back at Todd. “How is my wife?”

Claire knew who it was the moment the shiny new silver truck pulled up across the street. She watched her husband from behind the new tinted window. “Mitch,” formed across her lips like a sigh. She knew her husband’s outline, the way he moved, and thought about the night he sat in the middle of the street in his old black truck. It was in front of her little cottage she had at that time, after they had argued. She was sure he spent all night out there in the rain, but they both were too stubborn to let the other one know how sorry they were.
Tom Fleming followed her line of vision with an amused look on his face. “So, he did decide to come home.” He looked back at her from across the table. “Maybe I should go get him.”
“I, aw.” She saw the smile on Tom’s face and wondered why he wasn’t jealous. Tom never seemed to get jealous of her. “Are you sure you want to face your stepbrother?”
“Why wouldn’t I? Don’t forget, we work together. Just because my office is here, and he spends most of his time in Hamilton, doesn’t mean we don’t speak to one another.” He stood and set the paper napkin on his plate. “I’ll be right back.”
Claire watched Tom dodge soupy puddles through the window, and then turned to see her first husband walk up to her. Bob wiped his hands on his apron. “Bob,” she said. “Mitch is out there.”
Bob leaned his a-bit-too-big belly over the table and looked out to where Tom was. “He’s got a new truck, a nice one.” He sat down across from her and pushed Tom’s plate to the middle of the table. “He really embarrassed you the last time he was here, didn’t he?”
“It didn’t come as a complete surprise though, Bob.”
He gave her a compassionate look. “No, I guess not.” Bob reached over the dishes and squeezed her arm. “Let me know if he does it again. I’ll ban him from here, if you want.”
“Thanks, but I don’t want to come between you and him. I know you’re one of his best friends. I’m just tired of catching him with other women.”
Bob's features were stern. “You were my first wife and I still love you, Claire.” He looked back at Sue, who was taking an order from a customer. He winked at Claire and then stood. “I won’t cause any ruckus as long as he behaves,” he told her before he picked up the dirty dishes and left.