You are here: Products Respect My Gangsta by Ms.Pantha Jones 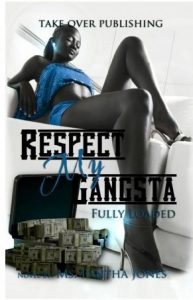 Respect My Gangsta by Ms.Pantha Jones

Now, that I have told you how tall you have to be to ride this ride. I warn you to keep your hands in, your mouths closed, your minds open, stomach strong and seat belts unfastened just in case you want to jump ship when it gets to real for you. You may proceed with caution! MY STORY IS SOMEWHERE IN MY BOOKS.

My own experiences when I was younger, I was not abused , however I was always outcast by my lighter cousins because of my dark skin. I was always told I was beautiful to be dark skin. it’s a phrase that infuriates me, to this day. Luckily for me, I did have a mom that told my skin was beautiful. I wanted to talk about the abuse that little girls I grew up with enduring. I needed to tell the world what my surroundings were and what happens in those types of surroundings if you do not have a stable home and foundation. But through all the abuse and hate she still loved and she loved hard. You have to find beauty in a story that begins with hate, thrives on hate but ends with someone finding love.

“Push, Baby Push,” a proud yellow man encouraged his wife to do as the doctor announced that the baby’s head was crowning. He looked down at his wife as if she was the most amazing person in the world. She gave life to their two boys and now she was giving life to their soon to be born daughter. He watched as the baby girl pushed into the world as if she was ready to conquer it. She did not cry which scared the father at first; the nurses rushed the little brown baby to the other side of the room. She didn’t cry until nurses started messing with her. It was an angry cry the father thought to himself that his baby girl didn’t like to be fucked with, yeah that’s going to be daddy’s little girl.
The father was relieved to hear her cry and as the nurse brought the beautiful baby girl over to the parents, the father felt proud but the mother felt disgusted and ashamed as she peered into her daughter’s eyes. She was born with eyes that resembled a nightmare and the ending of her life, as she knew it. On top of the piercing gray eyes, the baby girl’s brown fingers indicated that she was going to be much darker than the rest the family.
At that moment, her worst fear came into play. Proof of her infidelity with the gray-eyed dark hustler, was wrapped up in a joyous pink blanket. The husband did not see the joy in his wife’s face as she had with his sons. He couldn’t understand why a mother would look at her child like that, why would she look at our child like that? Why would she look at my child as if she had a repulsive taste that came from the pit of her stomach? He grabbed his baby girl too closely look at her, her mother reluctantly lets her go not out of selfishness as if she wanted her baby to herself but out of fear that her husband would see what she already knew. Right off, he could tell that the little girl was beautiful and would be even more so when she got older. He looked at her mesmerizing gray eyes and wondered if it was from one of their ancestors, he shrugged it off as genes. He saw that the little girl had some real jet-black curly hair that good stuff like her mother. He examined his daughter’s fingers and saw the darkness below her fingernails.
He was confused at the darkness of his baby girl. Their two sons were light-skinned and he and his wife are light skinned. He looked at his wife and seen the shame in her eyes. Then he knew she was not his. His world came to a crashing halt, to the realization that the love of his life was unfaithful. The child he was holding was not his, hurt and anger tormented the happiness he felt only minutes ago. He could no longer hold the baby girl. He couldn’t even bear to look at her.
At that moment, he gently placed the baby girl back into her mother’s arms. She quickly told the nurse in anger to take the baby to the nursery. She used the excuse that she was tired. The thought of holding that child made her feel disgusted. She hated the blood that ran in the little girl’s veins. She hated her gray eyes but she hated her dark skin the most. She even hated her own blood and the blood of the child’s father. It was because of them that the little girl even existed. The hatred of the child grew as her husband walked out the room. He made no eye contact with his wife but she could still see the hate. He left her with hurt and tears in his eyes. She knew she would never love that girl. She did not come from the man she loved. Just the man who could provide her with the excitement she craved. She vowed never to love the thing that would break her husband’s heart every time he saw her. SO, THE HATRED BEGAN…………

Be the first to review “Respect My Gangsta by Ms.Pantha Jones” Cancel reply