You are here: Products Resisting the Rancher by Kadie Scott 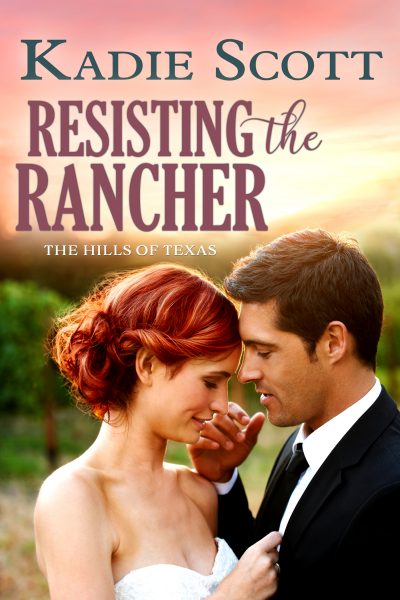 Resisting the Rancher by Kadie Scott

Contemporary romance author, Kadie Scott, grew up consuming books and exploring the world through her writing. She attempted to find a practical career related to her favorite pastime by earning a degree in English Rhetoric (Technical Writing). However, she swiftly discovered that writing without imagination is not nearly as fun as writing with it. No matter the genre, she loves to write feisty heroines, sexy heroes who deserve them, and a cast of lovable characters to surround them (and maybe get their own stories). Kadie currently resides in Austin, Texas, with her own personal hero (and she married that guy!) and their two children, who are growing up way too fast.

While standalone, this book is the second in a series set in my home state of Texas. There is nothing sexier than a cowboy, and I love to write them as well as the strong women who come into their worlds. This series features the Hill family, and, I have to say, Will is possible my favorite hero to ever write. You'll see why!

Rusty caught a whiff of cigarette smoke hanging around the man who’d taken the stool beside her. She didn’t bother to look over, keeping her eyes on her drink hoping he’d get the hint and go away.

He leaned forward and raised his voice. “Hey there, red.”

She turned her head and could now see he was swaying slightly. He gave a slow blink, trying to focus, obviously drunk. Great. She didn’t acknowledge the guy in any other way, but apparently looking at him was enough encouragement.

“My treat when you’re done with that.”

“I’m leaving when I’m done with this.” Maybe sooner at this rate.

He reached out and tugged on her arm. “Now don’t be like that.”

Rusty sighed. “I’m not interested.” She couldn’t be clearer than that.

The guy, who was good-looking enough—tall, blond, strong chin, and nice eyes—bristled visibly.

He straightened his back as his eyebrows lowered. “All I did was offer to buy you a drink.”

She turned back to the one she already had. “Thanks, but no thanks.”

“Move along.” She waved a hand as though shooing a fly.

He stood suddenly, his stool scraping along the wooden floor with a screech of protest loud enough to be heard over the music and chatter. In the mirror, several heads turned in their direction. Travis and Dave stood up, ready to intervene, but before they could do anything, and even before the jerk could say anything else, let alone touch her, a large hand landed on her shoulder and spun her around in her seat.

Rusty only had time to register the new player in the scene was that Will guy with the blue, blue eyes before he leaned forward and kissed her.

She gave a little squeak of protest and he released her lips immediately. The sudden absence of warmth left her feeling slightly bereft, which was crazy since he’d barley brushed his lips across hers.

Before she could process what just happened, he leaned forward and whispered in her ear, “Follow along and we’ll get rid of this guy.”

Realizing he was now standing between her legs, she hid the shiver sliding down her spine by giving him a tiny nod. He pulled back and smiled down into her eyes. The blue of his eyes, up close like this, was nothing short of startling. The irises were rimmed in black which somehow made the blue even bluer. She could drown in those depths, like falling into the sky, or the deepest of oceans. She had the strangest urge to trace the cleft in his chin.

“Miss me?” he asked, loud enough for the ass on the other stool to hear.

“Of course,” she purred.

Some small part of her brain registered that wasn’t exactly a lie. She’d spent a ridiculous amount of time thinking about him given their two extremely brief shared moments. They hadn’t even been properly introduced or exchanged more than a handful of words.

“Me too,” he said as he lowered his lips to hers again.