You are here: Products Resisting the Billionaire by Allie Winters 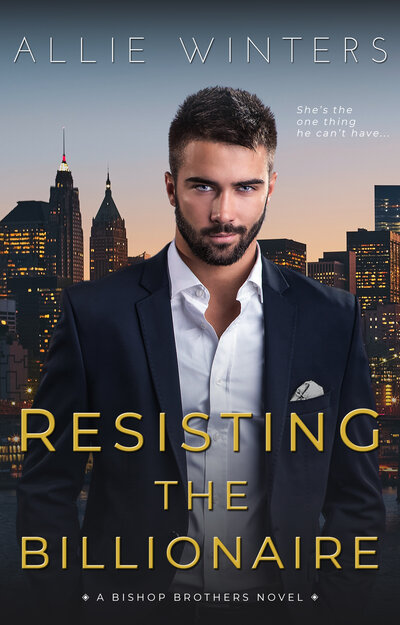 Resisting the Billionaire by Allie Winters

-Gabriel-
When I’m forced to make a deal with my father to marry the woman of his choosing for a business deal, I never expected to find someone I connect with. Someone who doesn’t fawn all over me because I’m the heir to a billion dollar fortune. Someone who sees the real me. And someone I can’t get enough of in turn.
There’s only one problem – I can’t have her. She’s the wedding planner.

-Mackenzie-
It’s the chance of a lifetime – plan the wedding of a billionaire’s son that’ll put my event planning business on the map and get me out of debt. A no brainer, right?
Except the bride wants nothing to do with this arranged marriage. And as the groom and I get closer, the professional lines between us blur until there’s something there neither of us can deny. With my business on the line and our chemistry off the charts, I’m torn whether I should keep resisting the one person I never expected to fall for.

Allie is the author of the Suncoast University series, the Bishop Brothers series, and the upcoming Psych 101 series. She lives in sunny Florida with her husband, daughter, and two cats. A librarian by day, she spends her nights writing happily ever afters.

“Whiskey, neat.”
The bartender sets a cheap glass in front of me, leagues away from the Waterford Crystal set and Glenfiddich back at my place. But I don’t want to be home tonight, alone with my thoughts. I’d tried it for a couple of hours and finally gave up. Tonight’s my last night of freedom until I become… engaged.
Just the thought leaves a sour taste in my mouth.
“Thanks, man.” I take a swig, grimacing at the mediocre quality, but they don’t exactly sell the good stuff here.
I’ve never been to this bar, but that’s why I chose it. Somewhere I could lose myself in anonymity, where people wouldn’t recognize Gabriel Bishop, son of tech billionaire Harold Bishop. Heirs to billionaire fortunes rarely frequent the- I glance over at the sign over the bar. That’s right – King’s Pub. Not sure if it’s referencing royalty or a person, but I guarantee no kings are setting foot in this place. The counter is sticky with some unidentifiable residue, and I’m fairly certain I’ll have to bathe in sanitizer when I get home.
But the point of being here is to get drunk and wallow in my sorrows, not worry about what germs are lurking on the surfaces.
I pick up my tumbler again, studying the clear amber liquid, a flash of color catching my attention out of the corner of my eye. I turn, spotting two women entering the bar, clearly out of place. One is pretty in an understated way, with long, dark hair plaited down her back. But my gaze stops on the other woman, temporarily blindsided.
Caramel curls tease the tops of her shoulders, a fitted blue dress and heels accentuating her trim figure. Her lips are painted a pretty pink with long lashes framing hazel eyes. She glances around hesitantly, following the woman she entered with over to the other end of the bar where they order. She studies a barstool, only settling onto it after carefully wiping it off.
The woman’s got standards then.
The other patrons don’t pay any attention to them as the bartender hands them each a martini, which I’m surprised they even serve here.
I watch her surreptitiously as I finish my whiskey, mulling over the idea of getting lost in a woman tonight instead of alcohol. It would save me a headache tomorrow morning at least. And who knows when I’ll get laid again? I’m not quite convinced the Ice Queen will be so accommodating.
I get a refill, standing to stroll over to her end of the bar, something about her drawing me forward, an innate sensuality she’s projecting despite the sweet image she’s trying to portray with the business appropriate dress and soft makeup. “I’m guessing this isn’t your normal hangout?” I motion to her with my glass, taking another sip as she turns her head my way. The burn of the alcohol isn’t so bad this time.
I swear there’s interest in her gaze before she quickly shuts it down, those hazel eyes even more striking up close, with flecks of golden brown interspersed among the green.
“Doesn’t look like your kind of place either,” she replies, giving me a once over. She’s right. The suit I put on earlier in an attempt to impress Dad costs what most people make in a month.
The woman beside her smirks into her martini glass, then turns away from us, checking something on her phone.
I lean an elbow on the bar, immediately regretting my decision once I remember what likely lurks there. “Maybe we could find a place that would suit us both a little better.”
She sets her drink down, turning fully toward me, amusement flirting over her lush lips. “And where might that be?”
I give her a smile, the one I’ve had women describe to me as panty-melting. “My apartment.”
She nods, clearly entertained, but for some reason, it doesn’t seem to bode well for me. “Did you really think you could convince me to sleep with you after talking to me for not even a minute? That I’d be so hot for you, I’d ditch my friend to go home with you, some random guy, to have sex at your place? Are you actually putting in that little effort and expecting a reward?”
There’s a choked laugh coming from the direction of her friend, and it takes me a second to realize my jaw is dropped. I quickly slam back the rest of my drink, just wanting this god awful day to be over already.
She takes a long draw from her martini, holding eye contact with me, then delicately sets it on the bar. “But seriously, better luck with the next girl. Whoever ends up in your bed tonight after that half-hearted pickup attempt is definitely a keeper.”
She turns to her friend, dismissing me, and all I can do is chuckle to myself at her chastisement. She’s absolutely right. That was a weak attempt by anyone’s standards. I wouldn’t be in the best headspace for anything tonight anyway.
“My apologies, ladies,” I murmur, pulling two twenties out of my wallet and sliding them across the counter to cover my tab and then some. “Next round’s on me. Have a good night.”
I button my suit jacket and exit the bar, not bothering to glance back. I know when to call it quits.
I wander around the city for an hour until my feet ache, the wingtips I’m wearing meant more for the boardroom than trailing aimlessly across Manhattan, then catch a cab to the Upper East Side, not wanting to bother my driver this late.
Tomorrow’s the first day of the rest of my life.

I walk into the conference room bright and early, fifteen minutes before the meeting is even scheduled to start, thank you very much. I’m resigned to whatever may happen today, and if I’m headed down this path, I might as well meet it head on.
A trim figure in a lavender dress is bent over at the front of the room, pert ass wiggling in the air as she retrieves something from a tote bag at her feet. I take a moment to appreciate it, averting my gaze as she straightens and turns around.
Both of us freeze, staring at each other as recognition hits.
It’s the girl from the bar.
“You,” we say in eerie unison. It would be comical in any other situation, but I don’t need the woman I hit on here in this office.
Those gorgeous hazel eyes narrow on me. “Did you not get the message last night?” she asks, placing the folders she took from her bag on the long, polished table. “Are you harassing me at work?”
I rear back. “Don’t flatter yourself. I’m here for a meeting.” Wait, did she say she worked here?
“This room is reserved for my meeting. I’ll go talk to Vivian.”
She moves past me, but doesn’t make it far before stumbling to a halt. I hold out an arm to catch her, but she steadies herself on the back of a chair, swiveling toward me slowly. “What meeting are you here for?”
“Wedding planning. Why?”
“I’m the wedding planner.”