You are here: Products Resisting Siobhan by Patricia Rosemoor 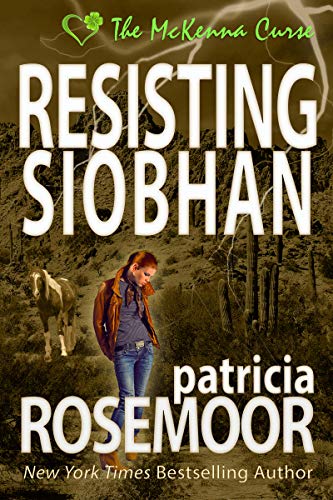 Despite their psychic connection, Siobhan McKenna once pushed Clay Salazar away and married another man. Better to break Clay’s heart than to be responsible for his death, as her family curse threatens any man she loves. But now widowed Siobhan faces trouble on her ranch. Clay, a Navajo-trained horse gentler, insists he’s the one to help her run the place and stop the attacks. With their special connection severed, she thinks his life should be safe… or will the McKenna curse claim another victim?

Why did these terrible things keep happening? Siobhan McKenna thought as she hunkered down to check on her mare’s injury. Garnet had been pastured for several days, and when Siobhan had gone to get her, she’d found the mare’s leg had been slashed open and badly infected. Not that Siobhan had been able to figure out what had caused the injury. Luckily, she’d checked on Garnet in time. The vet had told her another day without treatment and she might have lost the mare.
As she changed the dressing, she thought about her late husband’s fatal riding accident four months before and how she’d had nothing but bad luck since. Things kept going wrong on the ranch—costly accidents and mistakes depleting the ranch’s resources—and the stress was getting to be too much for her to handle.
If only Jeff hadn’t died…
A dose of guilt flushed through Siobhan. She’d believed Jeff was safe, exempt from Sheelin O’Keefe’s prophecy, or she never would have agreed to marry him. His death was her fault—she knew that. If the century-old family ranch went bankrupt, that would be her fault, as well…
Hearing a door slam, she looked over Early’s shoulder as a man alighted, the blazing sun in her eyes keeping her from seeing more than dark glasses, a black-brimmed hat and an athletic body encased in black jeans and a black T-shirt.
An errant breeze licked her and she shook off a sudden chill. Now what?
Surely no other bad news about the ranch.
line of sight. The hair on the back of her neck prickled as she turned to face him.
Suddenly her world shifted as she got an up-close and personal look at the man who was no stranger. He didn’t remove the sunglasses, but he tipped his brimmed hat back on his head. Her stomach tightened as she took in what she could see of him. Broad cheekbones… rugged jawline… straight blade of a nose. Her breath shortened and she had trouble getting enough air.
“Clay Salazar!” she gasped out, wishing she had something to hang on to so she could steady herself.
“Hello, Siobhan.” His deep, whiskey-laced voice still had the power to curl around her heart and through her insides.
Her gaze dropped to his mouth. To his oh-so-familiar lips now set in a hard, straight line. Totally unlike him, at least with her. The connection she’d always sensed when she got close to Clay was missing.
Was it him, because he had changed? Or was it her? What if she touched him? Would she feel it then?
She couldn’t think clearly.
Couldn’t speak.
Couldn’t breathe.
“Nothing to say to me?” he asked.
And even when her head went light and her knees suddenly felt as though they were made of rubber, still no connection. It made her want to reach out, flesh to flesh, to see if it was really gone—which would be good for her, she told herself. But she couldn’t let what she was feeling show, couldn’t let Clay think she needed him again.
Instead of giving him a warm greeting, instead of touching him as she itched to do, instead of doing any of the things her heart told her to do, she demanded, “Of all people, what the heck are you doing here?”