You are here: Products Rescued By the Scot by Laura A. Barnes 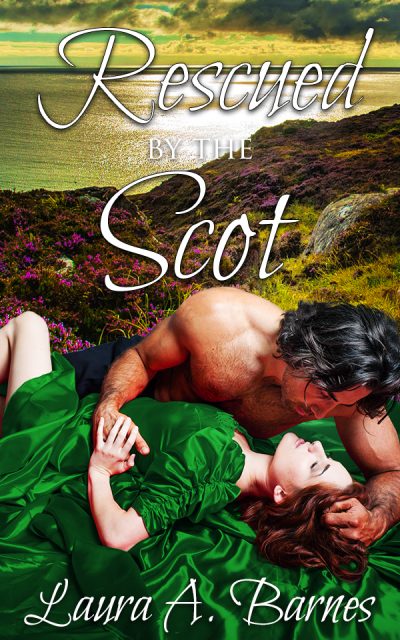 Rescued By the Scot by Laura A. Barnes

Rescued for vengeance
Set out to finalize a deal for her brother’s return, Skye MacKinnon instead captures the double agent working alongside her enemy. When she holds her prisoner hostage at her castle, he draws her into an attraction that spirals out of control. After she fights off his spell, she deceives him for her own agenda. As she betrays his trust, she is caught in the web of the evil villain who is terrorizing England. When her prisoner rescues her from the torture, she becomes afraid of her own shadow. As Skye recognizes her love for him, can she overcome her fears, or will she be forever destroyed by the violence of her mission?

Rescued for desire
Chained and left waiting for his own demise, Zane Maxwell is soon rescued by a Scottish goddess. He is enraptured by her charms and drawn under her spell. Her touch and look sink into his soul a connection he cannot resist. While he lures her into his confidence and seduces her into his bed, her only plans are betrayal. When she is captured, he realizes she was only protecting his life. Now he must rescue her and destroy the man who hurt her. Can Zane convince her of his love, or did he miss his chance of a life filled with the woman of his dreams?

I have always dreamed of being an aspiring author. I am making my dreams come true, one word at a time. When I am not writing, I am spending time with my family. I love reading books on lazy afternoons, and late into the night. Anytime really. Married 28 years to the love of my life and we have three wonderful children and two sweet grandbabies. Besides writing, I have always wanted to travel. In the last few years we have gotten our passport stamped in England and Scotland. We are hoping to add Italy to the list soon. My debut novel is Rescued By the Captain.

I wrote Rescued By the Scot as the final book in my Romancing the Spies series. I wanted to tell Maxwell's story. He was not portrayed very well in the first two books. His actions were suspicious and I wanted to explain why he acted the way he did.

I started writing books after I took an on-line writing course. The kids had all left home and I had a lot of free time on my hands. So I took the 500 word final and created my first book Rescued By the Captain.

Be the first to review “Rescued By the Scot by Laura A. Barnes” Cancel reply