You are here: Products Rescued By the Captain by Laura A. Barnes 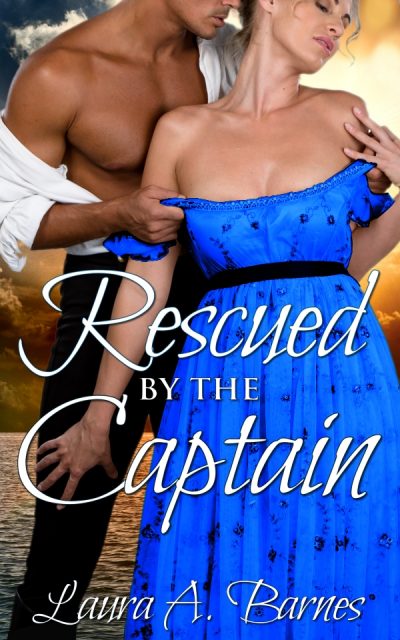 Rescued By the Captain by Laura A. Barnes

A Lady abandoned at sea. A Captain who rescues her. Two souls who thought they lost love, will they find it again?

When Ivy Mallory awakens; she finds herself on the ship of the man who rejected her love years earlier. Caught in the middle of a treason plot, she must help save her brother. To do so she needs to put her trust in the one man who can protect her.

Captain Marcus Thornhill never imagined he would find a lady floating unconscious in a lifeboat out in the middle of the open sea. When he rescues her, he gets involved in a treason plot that will bring the war to their beloved shores of England. As he unravels the plot he is unable to deny his desire for her. As Ivy falls more deeply in love with him, will Marcus refuse her love again?

Unlock Rescued By the Captain to start the historical romance series today!

I am the author of The Romancing the Spies Series. When I am not writing, I am spending time with my family. I love reading books on lazy afternoons, and late into the night. Anytime really. Married 28 years to the love of my life and we have three wonderful children and two sweet grandbabies. Besides writing, I have always wanted to travel. In the last few years we have gotten our passport stamped in England, Scotland, and Ireland. We are hoping to add Italy to the list soon. My debut novel is Rescued By the Captain.

I started writing this book as a 500 word final for a creative writing course I took online. After the class was finished I decided to turn the assignment into a novel.

BUT HE WAS CAUGHT off guard instead; he paused in the doorway stunned by the sight before him. Then he slowly smiled and quietly shut the door. His eyes slowly devouring the sight before him. She thought it would be a perfect time to get cleaned up. As she was sliding off Thorn’s shirt, the door flung open, startling her. Ivy stood in shock as she looked up and saw Thorn standing in the doorway with a growl on his face. Then she watched as he silently shut the door and leaned back against it with a devilish smile covering his face. She didn’t know whether she would rather deal with his growl or the smile. Either way she was in danger and needed to cover herself. She reached for the towel and covered her body. Thorn just stood there smiling at her, watching her become flustered. He had her right where he wanted her now. One way or
another he was going to get his answers. Also, he was going to make her his. This was going to be a productive afternoon after all. He didn’t speak; he was waiting for her to talk. His silence would be his weapon. Ivy was speechless. His silence was unnerving. She was caught, she knew it. He was not going to show mercy on her anymore. He was going to get all the answers to his questions. Ivy was powerless to him. She knew deep in her heart that she would be unable to resist whatever he asked or wanted from her.

Be the first to review “Rescued By the Captain by Laura A. Barnes” Cancel reply