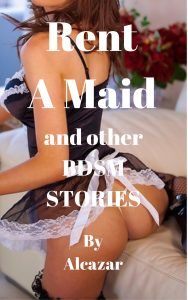 Four fascinating short stories that will keep you turning pages!

‘… he has succeeded in making something totally outrageous sound entirely plausible… and has done so erotically.’

Visiting a “Vide Grenier” in a French provincial town I saw a young woman pick up a Mardi-Gras Maid’s outfit. I wondered what she would do with it and thi story is the result

On the sidewalk she noticed a banner saying: ‘Vide Grenier!’
By now she knew enough of the language to know this was the equivalent of a garage sale. Bored as she was, she did not hesitate a moment and walked the few steps to the sale.
The lawn and garage of the ancient house were jammed with old stuff. Furniture, clothes, books, records, kitchen utensils, you name it and it was there. Looking at the quantity of stuff for sale she decided it must have taken at least three generations to amass it. The harassed young couple explained that ‘Grand Mère’s’ mansion had been sold on the condition that it would be empty. So they had taken it upon themselves to sell what they could. The inheritance had been shared with too many family members already…
Rummaging through the assorted junk, her eye was caught by something unusual. From a small, open suitcase popped a maids dress, a wig and some other stuff. She looked questioningly at the young lady, who said: ‘It looks like a mardi-gras outfit to me. You can have it for 10 Euro’s’.
Back home, in the privacy of her bedroom, she had a look at the dress. It was a maid’s dress all right. But terribly short and with a very low cut front. A black satin basque and two pairs of black, seamed fishnet stockings came with it. And the blonde wig was a good one, tight and thick, very life-like. A quick glance at het watch told her it was 4 pm. Another two hours before Frank would be home. Their love-life had been almost non-existent lately. What if she…?
Ten minutes later she stood in front of the full length mirror in the bedroom and looked in astonishment at het transformation into a smiling, sexy French maid. Her breasts jutted out provokingly, barely covered by the flimsy dress. The hem of the skirt just covered the wide, black tops of the fishnet stockings. Every time she moved, they came into full view, as well as the garter tabs. To show off her fine legs she had put on a pair of black patent leather pumps with six inch heels. Turning this way and that she frowned; there was something missing. She fetched a short length of inch wide black silk from a dresser and tied it in a neat bow around her neck. Then she attached a little white lace cap to the wig. That did the trick and when she walked away from the mirror, she wiggled her bottom saucily. Her stocking tops and garter tabs flashed into view with each step she took. It excited her. And if it excited her, she was pretty sure what it would do to Frank.
‘Hi, honey, I’m home’ Frank shouted as he opened the front door.
‘Be right with you, just sit down and relax’ said her voice from the kitchen.
To his surprise the table had been laid for one. Candles were burning and there was a nice fire in the grate. He sat down in his easy chair, puzzled by it all. Then Laura came in with an unfamiliar clicking sound of stiletto heels and his mouth fell open.
She was wearing her maids outfit, carrying a glass on a tray.
‘I made you a Manhattan, darling’ she said and bowed, allowing him an almost unobstructed view of her fine breasts encased in frilly white lace.
He stammered ‘Why… what…?’ and reached for the glass.
She turned around just so, giving him a glimpse of her stocking tops and garter tabs.
Then she put an arm around his neck she sat on his lap. ’Tonight I am your maid, your sex slave. Anything you say, I will do…’ she murmured in his ear.
Then she got off his lap and stared at her wiggling backside as she walked back to the kitchen. He shook his head and downed the Manhattan in one big gulp. When he had found his voice again he shouted for another one. To his astonishment she came parading in within a minute, carrying another Manhattan on a tray. He stared at the sexy high heels and fishnet stockings. And when she bent over deeply to offer him his drink, he was sure she did it so he could see her breasts exposed to the top of the aureoles and the edge of her nipples. A bulge was growing in his pants as he watched her walking back to the kitchen…