You are here: Products Redeemed by Tonya Brooks 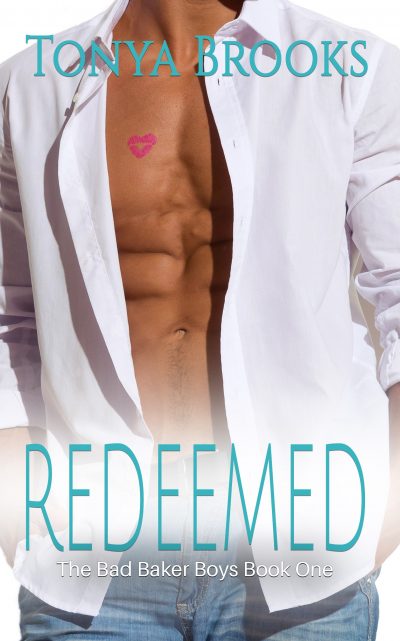 She was too innocent. He was too broken.

Jed Baker had lived through hell on earth and had the nightmares to prove it. In the last six months, his SEAL team had been slaughtered, his best friend was learning how to walk again, his career was over, he’d lost his family, his home, and his goddamn mind.

His erroneous belief that the shitstorm couldn’t get any worse went up in smoke when he met the most vexing female to ever draw breath. Ginny Lawson was the quintessential girl next door that warriors like him had been fighting to protect since the beginning of time.

It didn’t help matters that her brighter than sunshine smiles warmed his cold, barren heart and gave his tormented soul peace. She was everything pure and good and he’d walk through the fires of hell to keep her safe. Even from himself.

Could her unconditional love be his salvation?

Or will she be his ultimate destruction?

Redeemed, the first book in the Bad Baker Boys series is a complete story with no cliffhanger and available as a permafree at all retailers

Tonya Brooks is a teller of tales, a dreamer of dreams, and a weaver of words. Her steamy romances contain action, suspense, and humor with unexpected plot twists and turns. You never know what's going to happen next, hence her catchphrase, It's all smoke and mirrors till… The End.

She lives in Myrtle Beach, SC with her very own bad boy husband. Most weekends you can find them playing tourist in their hometown, at a festival, or shell hunting on the beach. She's a coffee addict, dark chocolate connoisseur, and lover of all things romance. She loves to read, loathes cooking, has extremely eclectic taste in music, and a wicked sense of humor.

Jed, the male lead, was a secondary character (in the rest of the series) that the readers loved so much they insisted his story be told. I loved him so much that it didn't take much prompting!

The sound of the door slamming shut reverberated through the ten by ten holding cell, as loud and ominous as a death knell. The hunter had become the prey, and now he'd been caged like an animal. Jed Baker's spine stiffened in defiance at the thought. Fuck that. He'd been in tougher situations before and come out on top.

With that dismal thought in mind, Jed turned around as instructed, and stuck his hands through an opening in the bars. He didn't move a muscle when the handcuffs were removed, nor did he rub the red gouges where they had dug deeply into his wrists.

What he did do was level a killing glare at the dipshit deputy to reinforce the warning that he'd given the man earlier. Peters, or Deputy Fife as Jed preferred to call him, met his cold, hard gaze and took a hasty step back. Jed let his lips curl into a menacing smile, and the deputy paled to ash again.

The little shit had a right to be scared. The only thing that had saved him from the ass-kicking that he deserved was the fact that Jed couldn't afford to add resisting arrest or assaulting an officer to the charges already levied against him. If he had a hope in hell of getting out of this mess, he was gonna have to play nice.

Had it not been for the years of discipline that the Navy had instilled, he would have given in to the violent rage simmering inside and beat the living shit out of Reverend Lawson, and the hell with the consequences. But Ginny had been upset enough at seeing him arrested and slapped in handcuffs; watching him tear her father to shreds wouldn't have helped the situation.

He walked over to the cot and sat down heavily, elbows on his knees, head in his hands. Jed closed his eyes and pictured Ginny's face the last time he'd seen her. Her father had been dragging her to the car, her clothes in her arms, tears streaming down her pretty face. The fear in those big blue eyes would haunt him until his dying day.

Yeah, 'cause he really needed another demon tormenting him.

In the last six months, he'd lost everyone and everything that had mattered to him. His teammates had been slaughtered, his best friend was learning how to walk again, his career was over, and he'd lost both his grandfather and his home. Hell, he'd even lost his goddamn mind. And just when he thought things couldn't get any worse, he'd wound up in fucking jail.

How the hell had it come to this, Jed wondered in despair.