You are here: Products Redeemed by Maggie Blackbird 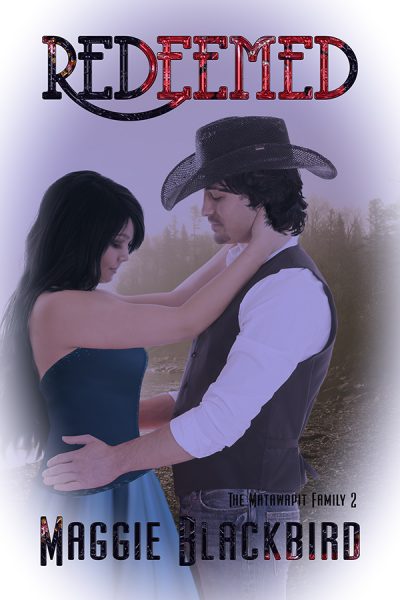 Bridget Matawapit is an Indigenous activist, daughter of a Catholic deacon, and foster mother to Kyle, the son of an Ojibway father—the ex-fiancé she kicked to the curb after he chose alcohol over her love. With Adam out on parole and back in Thunder Bay, she is determined to stop him from obtaining custody of Kyle.

Adam Guimond is a recovering alcoholic and ex-gangbanger newly-paroled. Through counselling, reconnecting with his Ojibway culture and twelve-step meetings while in prison, Adam now understands he’s worthy of the love that frightened him enough to pick up the bottle he’d previously corked. He can’t escape the damage he caused so many others, but he longs to rise like a true warrior in the pursuit of forgiveness and a second chance. There’s nothing he isn’t willing to do to win back his son–and Bridget.

When an old cell mate’s daughter dies under mysterious circumstances in foster care, Adam begs Bridget to help him uncover the truth. Bound to the plight of the Indigenous children in care, Bridget agrees. But putting herself in contact with Adam threatens to resurrect her long-buried feelings for him, and even worse, she risks losing care of Kyle, by falling for a man who might destroy her faith in love completely this time.

An Ojibway from Northwestern Ontario, Maggie resides in the country with her husband and their fur babies, two beautiful Alaskan Malamutes. When she’s not writing, she can be found pulling weeds in the flower beds, mowing the huge lawn, walking the Mals deep in the bush, teeing up a ball at the golf course, fishing in the boat for walleye, or sitting on the deck at her sister’s house, making more wonderful memories with the people she loves most.

This book, although a standalone, is the second in the series. I wanted to write a story for Bridget, Emery's older sister. The first book, Blessed, hints at her background. She's a foster mother. She ended her engagement to her ex-fiance. And Redeemed was born. Adam, the hero, is from the streets of Winnipeg, an ex-gangbanger and recovering alcoholic. He is seeking redemption.

Adam’s throat wouldn’t stop constricting. A hard ball formed at the base of his neck.

This visit was about his son. If he looked at Bridget again in the sleeveless blouse baring her sleek arms that she used to wrap around his shoulders, or the tight pants draping her slim thighs she’d spread wide for him, or the sexy high-heeled sandals giving him a peek at her red-painted toenails she’d caressed across his calf, or her red-painted nails she’d scratched across his back, it’d be all over for him.

He’d close his mind to her thick, long, black hair, the delicate bone structure of her face, shining midnight eyes, and sensual lips.

Kyle kept quivering, gaping at Adam. His son’s buzz cut must have been Bridget’s idea. Before his incarceration, Adam hadn’t allowed scissors to touch his only child’s black hair. Now was the time to put his anger management classes to use. If he’d been on the outside, Kyle’s hair would be halfway down his back by now.

Using the voice of the past, the one reserved for his boy that was a good three octaves higher and sweeter than maple syrup, Adam offered what he hoped was a dazzling smile and said, “Hey. You had a birthday, didn’t you?”

“What’cha got there?” Adam pointed at the bag.

“A doughnut. Mommy…Mommy let me get one.” Kyle’s tiny voice shook, barely a whisper.

“I…I…” The little guy kept trembling like Adam was some monster from a bad kiddie cartoon.

Adam fished the toonie from his pants pocket. He must act quick or tears would erupt from his boy, straight in front of the note-taking Hawk, who’d probably slam the brakes on Adam’s visits. “Want a pop? We can get whatever you like.”

“You wanna sit over here? There’s some coloring books.” Adam pointed at the round table and tiny chairs.

“N-no.” Kyle stared at his running shoes with the words Z Men emblazoned on the sides.

Defeat dragged Adam’s shoulders downwards. He forced his sunken chest outwards. Help me, Creator. Help me and my boy reconnect.

He sat on the floor cross-legged, having done this tons of times when Kyle had been small. Under his breath, Adam hummed the Ojibway morning song.

He kept singing and held out his hands for the big test.

Kyle shifted and sat cross-legged, too. His small hands shook, but he wrapped his fingers around Adam’s. Their first contact in almost four years. The warmth of Kyle’s hands, the boy’s smooth palms, and the trust he’d shown by holding hands almost melted Adam’s scarred heart.

He sang the last words of the song and squeezed Kyle’s fingers.

“Do you go to powwows? Do you wear feathers?”

Hope beat against Adam’s ribcage. They did stand a chance of becoming father and son.

“You did. I brought you with me. I put ’em right here.” Adam tapped the back of Kyle’s head where he used to attach the roach of porcupine hairs and the two feathers fastened to the spreader.

“I…I did? Wow. Can I wear it again?” Anticipation clung to Kyle’s question.

“You’ll need a new one. The old one’s too small.” Adam had better find a woman at the Kitchi-Gaming Friendship Center to make a northern traditional dance outfit for Kyle. As for money, he’d dig into his precious savings, what he’d stashed away for his new life with Kyle, for new regalia.

From the corner of his eye, he stole a peek at Bridget’s tight ruby-red lips. Her frigid glare was as hard as any man’s on the range in the pen.

“I hear you want to be an altar server.”

Kyle’s buzzed head bobbed. His long, white teeth gleamed. “I start grade two when summer’s done. Mom said when I do…um…the bread of Christ thing, I can help Father Arnold at church. It’s a really important job.” He came off his butt, leaning forward. “Uncle Emery said when he was my age he did it. He…he’s not gonna be a priest anymore. I have a new uncle now. Uncle Darryl. Uncle Emery got married. He married Uncle Darryl.”

“Your mom told me in her last letter.”

“Where the big kids go.”

“Oh, high school.” Adam had better take a refresher on kid speak. “Yep. Dad finished high school when he was away.”

“Where’d you go?” Kyle tilted his head and puckered his lips. “Why’d you go away?”

Adam inched his hand forward and stroked Kyle’s fuzzy head of prickly hair. When the boy didn’t draw back, Adam’s breathing seemed to simmer like the relaxing shower he had last night.

“We’ll talk about it another time. I want you to understand I didn’t want to leave or go away that long.”

“Then why’d you go?” Kyle’s large eyes drooped at the corners.

“I had to. Sometimes we gotta do things we don’t wanna. But I’m back now. I’m not going anywhere.”

The sharp intake of breath belonged to Bridget. Adam looked over his shoulder at his ex-fiancée’s rigid jaw and eyes colder and harder than onyx.

She didn’t believe him? She believed he’d return to his old ways? He not only wanted Kyle back, he wanted Bridget back. They were the reason Adam had kept his head low in the pen.

As the counselor had said, Adam deserved happiness like anyone else. This time he wouldn’t run in fear from what Creator offered. And Creator was offering Adam a second chance—his son and a new life with Bridget.

Be the first to review “Redeemed by Maggie Blackbird” Cancel reply