You are here: Products Red Light by Alexis Shore 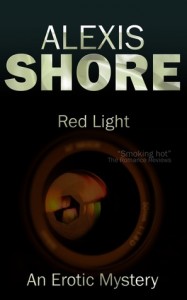 “I love your writing.” Bella Andre

When Olivia’s boyfriend disappears in the blink of an eye, the police are no help, and she is forced to turn to a rookie private detective.

She snuggled back into the pillow and listened to the rain hammering against the window pane. A crack of lightning lit up the shadowy room, and she started to count the gap until the thunder rumbled.
Five seconds.
It was getting closer.
She hoped he was coming with the storm. She’d needed his cock inside her all day. It’d consumed her mind ever since she woke up. All she had wanted as the hours ticked by was a damn good fucking. And the toy in the bedside drawer had done nothing to alleviate the horniness. In fact, it’d just made it more intense.
She stroked her hand down her flat naked belly, teasing her fingers through the soft hair of her bush, wanting so badly to find and play with her clit. Unable to hold back, her fingertips pressed onto her hood and gave her button a gentle tease, before she slipped down and felt her juicy lips parting.
With her other hand she cupped at her swollen breast, pinching at the nipple as hard as she could, rolling and pulling at it.
She promised she would stop teasing herself the moment of the next lightning flash.
And she did.
She pulled her fingers free and started counting out loud.
Four seconds.
Images of being naked outside in the storm filled her mind. She imagined his car pulling up, imagined him climbing out and seeing her there, dripping wet, imagined him overcome with desire, imagined being bent over the hood of his sports car and fucked roughly from behind as the storm raged around them.
She hadn’t felt his cock inside her for days now.
He’d been down on her last night, but was too tired for more after his tongue had bought her to climax. Maybe that’s why she was so desperate for a proper fuck now.