You are here: Products Recruit: An Unlikely Romance by Peter Casterly 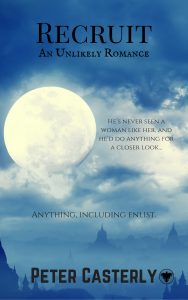 When he doesn’t fiddle around with his guitar, he writes books about Romance and Fantasy. Being an avid Manga and Fantasy Romance book reader, Peter takes the best from the things he enjoy to create Unordinary, Creative and Romantic Short Stories.

This story will appeal to both Romance and Fantasy book lovers. Combining the best of both worlds the author has created a tale of love that takes ones struggles to acquire what he desires on a whole new level.
Aiden’s never been very interested in the war… until he set eyes on the beautiful and fierce Lieutenant General. He’s never seen a woman like her, and he’d do anything for a closer look.
Anything, including enlist.
In the North Kingdom of Perland, war has been battering at the borders for decades. Neighbors to the east and to the south both want to expand their own kingdoms–if they ever stopped fighting each other, Perland wouldn’t stand a chance. It’s hard to tell exactly who is winning, but the average folk are definitely the ones suffering the most losses.
Aiden doesn’t have much to do with the war. It hasn’t reached the city of Harlborough yet, which is where he’s lived all of his years on the streets. He’s been an orphan for as long as he can remember; the war can’t take much more from him, anyway.
But there are some people who can still make his life even more miserable, and he happens to owe them quite a bit of money. His efforts to avoid them are falling flat, and it won’t end well for Aiden if something doesn’t change, and quick.
At this strangely opportune time, the King’s army holds a rally in Harlborough, asking one and all to come swell the ranks..

Be the first to review “Recruit: An Unlikely Romance by Peter Casterly” Cancel reply