You are here: Products Razor Trilogy by Nadine Doolittle 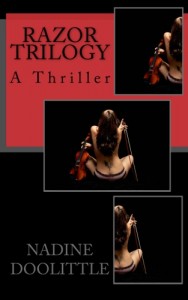 Classical violinist Charlotte Dawson needs money. Billionaire Daniel Razor needs a companion for his agoraphobic brother. Razor makes her an offer: Charlotte will be paid one hundred thousand dollars in exchange for one year of service to the handsome, talented, but deeply troubled Joel Razor. The job is too good to be true but Charlotte accepts. Then Daniel Razor comes to her with a request that redefines the role of companion and Charlotte discovers the lengths she will go to realize her ambition.

SET IN fog-shrouded San Francisco, Razor Trilogy is noir suspense in the tradition of Alfred Hitchcock. Originally published on Amazon in three novellas (Razor Wire, Razor Blade, and Razor Edge) Razor Trilogy wraps up the mystery but the series will continue in January 2016. At the time of this writing, it was still possible to throw a body off the Golden Gate Bridge.

I wanted to write a billionaire romance for all the wrong reasons. But then Daniel Razor became more and more complex and Charlotte’s fierce determination to be a concert violinist drove the plot to places I didn’t expect. They are naturally suspicious of each other at the same time they are deeply drawn to each other. I enjoy exploring the theme of dependence and mistrust in the sequels.

THE FAIRMONT Hotel in San Francisco is dazzling. If you’ve never seen it, it is totally mind blowing for the average person. I tried not to gawk at the architectural details and stunning crystal light fixtures but I couldn’t keep my eyes in my head. It didn’t help that I was mingling with the richest and most recently rich people in the nation; the sort of people whose names appeared on the donor lists of the orchestras I followed.
Daniel took my arm and led me into the white and gold ballroom. I was wearing a sleeveless gown of ice blue silk. The square bodice was snugly fitted to my breasts, pushing them up over the tulle. My waist was pinched in by the built-in stays and the skirt flowed to the floor like a river. The stylist who had arrived at the office to do my hair wove it into a thick braid laced with tiny pearls and tendrils framed my face. She fixed my make up too, removing the eye shadow I had chosen that morning and the lip gloss. She more or less gave me a complete make-over. I looked a lot less like a girl who worked for Razor Industries and more like the kind of woman Daniel Razor would be seen in public with.
I sipped champagne and listened to the music, paying close attention to the string section. I was tolerable on the piano and I had learned guitar just for fun. The violin was my passion. The violinist in this orchestra was very good, not concert level, but she was probably holding back for the dancers.
I was so absorbed in watching the musicians that I missed Daniel’s approach.
“Would you like to dance?”
He was wearing a black tux and exuded elegance and smoldering sexuality in the glittering light. His coal black hair and piercing stare took my breath away. I forgot why I was there. He took my hand and led me out onto the dance floor. The moment I stepped into his arms I forgot I was his employee. Our bodies pressed together. His hand was broad and warm on the small of my back. We moved in a slow waltz in the center of the room. Daniel’s mouth brushed against my neck. “You look very beautiful,” he said in a low voice.
I gulped. “Thank you. So do you.”
My thoughts scrambled. I tried to remember this was just a business date but there was something about his manner that was definitely sexual. Lust simmered beneath Daniel Razor’s business façade. He held me and as we turned slowly across the floor, I got the impression he was hitting on me. But that was crazy. Daniel Razor was a professional who had hundreds of women in his employ and never crossed the line with any of them. He wouldn’t break that rule for me.
His lips brushed my neck sending electric shocks shivering down my spine. He made some comment about the ballroom but neither of us was interested in talking. His mouth was near to my earlobe. When I moved my head my lips were almost touching his. I couldn’t think clearly for several minutes. The room was misty, blood roared in my ears. Daniel pulled back slightly to look me in the eye.
“Let’s get out of here.”
I nodded and allowed myself to be led through the foyer and then to the waiting town car.
In the fog of lust, fighting my way back to reason, I asked to be taken home.
“Soon. There is someone I want you to meet first.”