You are here: Products Ravaged by Brother Wolf by Nadia Wilder 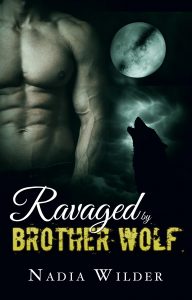 As she reached her bedroom she felt strong hands grab her arms and twirl her around, pressing her against the door and slamming it shut.
Grabbing both of her wrists, Kyle lifted her arms over her head, slamming her against the door. “Kyle! What are you-” His lips silenced hers, pressing firm but not too hard. She felt her knees wobble. As the kiss ended, Amelia opened her eyes. “What just happened?” she thought, dazed.
Her eyes met her stepbrother’s. They were… hungry. He grinned. “I’ve wanted to do that for a while now.” He said in a voice deeper than usual. “I’ve wanted to do a lot of things.” His grin curved into a smile, bearing his teeth as his eyes began slowly moving down her body.
Transfixed, Amelia gazed at Kyle’s teeth; specifically the canines. They were becoming longer, sharper. His eyes flicked back to hers.
“We shouldn’t… you shouldn’t be doing this.” Amelia peeped feebly. “You’re my bro-…” she caught herself, “You’re my stepbrother. We can’t do this.” He face twisted in a snarl before twirling her across the room.
Hand on her neck, he pinned her against her bedroom wall. Her eyes were wide now, staring at the beast in Kyle’s skin. He leaned in closer to her face. Amelia’s lips began to part, before his head moved to her ear. “But this was just getting interesting.” He growled confidently.
Amelia quivered, terrified, and yet… She found herself feeling disappointed that he didn’t go in for another kiss. She wanted to taste him again; his lips, his mouth. He tasted wild and she wanted more, despite her earlier protest.
“W-what are you g-going to do to me?” stammered Amelia. Kyle’s wolfish grin appeared once again. “Whatever I want” He replied.