You are here: Products Ransom: A Bad Boy Mafia Romance by Amy Starling 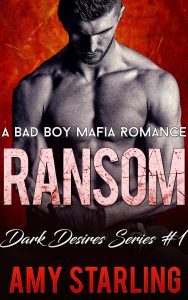 Amy loves gardening, hiking, video games, and cooking new recipes. She lives in the Dallas-Fort Worth area with her husband, two sons, and four cats.

Be the first to review “Ransom: A Bad Boy Mafia Romance by Amy Starling” Cancel reply