You are here: Products Random Bullets by Joy Mutter 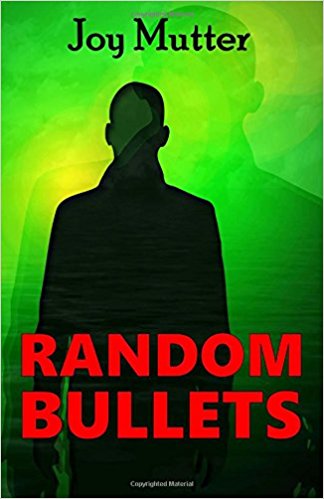 I would love to hear what you think of all of my books.

Random Bullets is my sixth book. I was inspired to write it after a chance remark by my sister concerning inheritance. Disinheritance is a subject I know something about, having been disinherited by my crazy father fifteen years ago. The book became much more than a mere story of disinheritance and is now my favourite book.

Now in her late sixties, she was beginning to feel achy after the long walk out to the tide’s edge. To restore her depleted energy, she foolishly decided to lie out on an unusually flat rock under the fiercely hot sun. She closed her green eyes and listened to the plaintive, monotone cries of the gulls circling above her head, trying to banish thoughts that the birds might dive bomb her to protect their nests. As the sun’s rays warmed her fashionably thin body through her expensive swimsuit, she drifted into a deep sleep.
She was jarred awake by a freezing sensation. Her bathing suit was drenched through from the spray of the waves that were crashing against the surprisingly comfortable rock on which she had accidentally fallen into sleep.
She glanced at her watch and discovered to her horror that she must have been asleep for well over an hour. Florence suddenly realised that she had committed a huge error, one more typically made by holidaymakers and not by people born and raised on the island. Residents respected the sea and its capricious ways.
‘Shit! I’m totally cut off by the tide. I didn’t mean to fall asleep. I’m usually the one to warn holidaymakers about getting cut off by the tide, now here I am, cut off by the sodding tide! Shit, shit, shit and fuck!’ She stood on tiptoe atop the rock, waving her arms like a demented windmill, but she was too far from shore for anybody to see her. The magnetic pull of the tide’s current eventually made standing impossible. The rock was soon covered completely in sea water and she struggled to keep her bare feet on the rough surface of the submerged rock. As the waves whipped up around her, she thought, ‘There’s no other option except to swim for shore. Shame I must leave my bag of prawns behind, but the wind has come up and I’ll need all of my strength to reach safety.’
The ice cold of the water made Florence gasp as she pushed her aging body off from the rock that she had been sleeping on. The tide’s powerful current was pulling her further out to sea, much to her increasing alarm. As waves crashed over her head, with the salty water stinging her eyes and pouring into her mouth and nose, Florence panicked more than she had ever done before. She was making no headway, cursing as seaweed wrapped around her limbs. The cold was making her hallucinate, with the grasping clumps of seaweed taking on the appearance of sea monsters.
Although Florence could swim, she had never been a strong swimmer. Battling against the current and freezing cold water gradually sapped every ounce of her strength. Slowly losing consciousness through hypothermia, she sank below the surface, her lungs filled with water and she drowned.
The split second that Florence’s heart stopped pumping, she was whisked upwards through the water and high into the air. Something was pulling her effortlessly over the sea wall and across the road to her home. She landed effortlessly in the branches of a flowering cherry tree in her garden, just above the heads of Marcus, Charlie and Lara.
Charlie and Lara had been visiting his parents’ house in Jersey as they often did, leaving the Cornish sea-food restaurant in the capable hands of his restaurant manager. The trio all sported swimwear and were drinking cider as they sprawled indolently on sun loungers around the pool. Florence screamed at them for a solid ten minutes to try to gain their attention, but they just kept on talking between themselves, oblivious to her distress.
‘I wish mum would hurry back with the prawns. I really fancy a prawn salad tonight,’ said Charles sulkily.
‘I’d have thought you’d be fed up with the smelly things, what with us owning a seafood restaurant,’ Lara chipped in with a slight sneer.
‘Oh God, the prawns that I caught will all be washed away by now. What will they eat for supper?’ thought Florence, unaware that she had far greater problems to deal with, and yet no problems at all.
Whilst her spirit was struggling to acclimatise to being up in the cherry tree, Florence’s discarded shell was washed up on the beach hours later. Her body was deposited like a large piece of driftwood amidst the other shells, seaweed and litter, much to the horror of a couple of paddling middle-aged holidaymakers that had stumbled upon her corpse.
Florence pondered a while. ‘How is it possible that I can think if my brain is lying washed up on the beach with the rest of me? It makes no sense. I must be in another weird dimension that nobody ever imagined existed. I’ll hopefully get used to it, eventually. The best that I can do to contact those three fools below is rustle a few leaves. It’s taking far too much energy even to do that, so I’m not going to bother trying any more. It is probably for the best, because communicating with the living will neither solve my problems nor theirs. All that’s left for me to do now is to observe. Hmm, that’s a thought. Observing could turn out to be interesting. It means that I can spy on Marcus without him being aware that I’m watching his every move. I’m sure that he’s been talking online to sluts whenever I wasn’t around. I doubt that he’ll be in the mood to do it tonight once he’s been made aware that I’m dead. Hang on! He’s looking at his phone now whilst the other two are busy swimming in the pool. I’ll swoop down next to him and have a gander at what the old bugger is looking at.’
In a flash, his invisible wife was leaning closely over Marcus’s shoulder as he scrolled through his phone with a secretive smile on his weather-beaten face.