You are here: Products Rancher Daddy by Lexi Whitlow 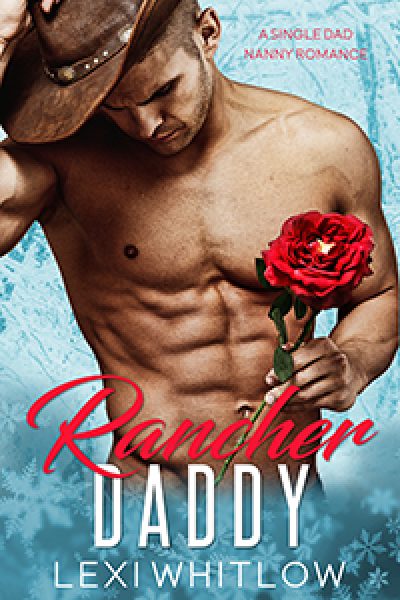 An isolated Montana ranch.
A gorgeous woman, bringing my heart back just as the snow starts to fall.
And a disaster, about to destroy everything I’ve built.

My ex-wife left me with a sick little girl and a ranch to tend.
I’ve been alone since then—me and my kid against the world.
Until Grace appeared with her smart mouth and teasing smiles.
She makes my little girl light up like a Christmas tree,
and she’s reminding me of what it means to be a man all night long.
But the ghosts of my past are coming back to haunt me,
and Grace’s old life is calling her home.
We both need to make a choice—she can stay with me, or go her own way.
My dark past is holding me back,
Until a fire threatens the entire ranch,
And the woman I love is in danger.
I’ll do anything to save her, to keep her next to me,
and protect the family we’re creating together.

Lexi Whitlow is a small-town girl with big dreams. She spent her early years growing up between Virginia and North Carolina, playing in the dark rich dirt of Eastern North Carolina at her granddaddy's farm. She's a Southern as can be, and she spends her days chasing her five-year-old and her puggle (that's a pug-beagle hybrid, folks) and writing her ass off.

She holds a master's degree in English literature, and her mom is so proud she's "using her degree."

Lexi harbors a not-so-secret love for bad boys. She loves fighters, tough-as-nails cowboys, bikers, and criminals. Her husband is a scientist… but he has the heart of a bad boy for sure. She spends what little free time she has crocheting, painting, and going on long walks with her family.

I absolutely love western romances, and there's nothing hotter than a cowboy! I also wanted to do a holiday theme with this one since I love Christmas so much. And believe me, Grace and Camden have a yuletide romance that will melt the stockings right off your mantle.

“She’s got a passive hand, but her seat is nice. You could do a whole lot worse. You have before.” That’s what Tyler said, smirking at me, just before he, Jacob, and Amanda headed home. I got his meaning. Amanda liked her too. She made sure I knew it.  “It takes a shitload of guts for a city girl like her to come out here, put on somebody else’s boots, then wander off into the mountains with a bunch of complete strangers,” she said.  That’s true. I’d never put on someone else’s boots. Then again, I’d never need to. For the life of me I can’t figure this girl out. She’s won everyone over, even Jack. Jack doesn’t like anyone except me, and even he let her scratch his neck and stroke his nose. Usually, when someone other than me gets that close, he blows a load of snot in their face and then strikes—hard. But he just stood there, his ears perked, breathing her in. Jack is the best judge of character I know. If he likes her, she must be good people.  After the towel incident in the stable, dinner is a little awkward. Ordinarily I wouldn’t give a shit, but the way she hobbled away from me, not even giving me a backward glance, I felt bad for being so short with her. Emma admitted it was her fault. She may only be almost five, but she knows her limits and she knows the rules. She was showing off for Grace, and Grace got hurt. I pass the potatoes to Grace, who’s staring at her plate in silence like she’s afraid to speak. I made meatloaf with creamed potatoes, gravy, and buttered Brussel sprouts. It’s not fancy, but it’s good food, and I hope that my efforts aren’t wasted. It took me some time and wasted groceries to learn how to cook. Now that I’ve almost mastered it, I look for approval wherever I can find it. Grace doesn’t appear to be impressed by my grand gesture. “About this afternoon,” I say, my eyes trailing to Emma. “You’re not riding again until at least Tuesday. And if you ever do that again, you’re not riding ‘til you turn thirteen, and then only on a worn-out trail nag. You understand me?” Emma looks up at me, a remorseful expression straining her precious features. “I’ll never do it again,” she says. “I promise, Daddy.” “Good,” I say. “It took me thirty minutes to get Stoney in. It was dark by the time I got him settled. He could have gotten hurt, or worse.” I glance over and see Grace staring at me, a circumspect expression straining her face. I address her. “And you’re going to have to get up to speed on how this place works. Life on a ranch isn’t like life in town. It’s physical work, and it can be dangerous.” Yeah. I said that. You’re going to have to get up to speed… Grace blinks. Everyone loves her. Emma loves her. She made it halfway up the mountain today without giving up. It was fifteen degrees up there, but she didn’t complain. She was laughing and taking pictures with her cell phone. “Tomorrow we’ll drop by the sheriff’s office for that background check,” I say. “Assuming that goes okay—when can you start?” Grace shovels a forkful of potatoes into her mouth, chews a little, then swallows. She shrugs. “I guess a few weeks,” she replies nonchalantly. “I need to go home and pack my stuff. Give notice at work.” She turns to me, a question in her eyes. “I drive a really old Honda. Do you think it’ll make the trip over the mountains?” “Probably,” I admit, reluctantly. “It’ll get you here.” Who drives a Honda? No clearance. No power. You can’t haul anything in it and it won’t tow a trailer. That is some impractical transportation right there. It may get her across the country, but it won’t be much good once she’s here.