You are here: Products Quickies With A Bite by Shirley Li 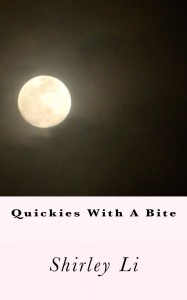 Quickies With A Bite by Shirley Li

A life long writer of mostly paranormal erotica, throwing in the occasional human story to keep things interesting. Lives in sunny California with her husband and kids.

I have been writing paranormal erotica for almost as long as I can remember. These short stories evolved in my dreams, of all places. That is when I got most of my creative inspiration. The stories in this particular book have different paranormal characters that will appeal to just about every woman who ever fantasized about being taken by a creature that couldn’t be real. I had a great time with this book.

“Just how many times do you need to come in one night?” Mark asked as he stood up and pulled his jeans back on.
“As often as I can. But I’ve learned from experience that having sex with human men is too dangerous for them. They’re like dollar store batteries that wear out after one use.”
He laughed at her comparison, giving her his shirt to put on.
“And shifters?” He prodded as he put his shoes on.
“Shifters tend to see my sexual appetite as a challenge. But they end up being more like car batteries as opposed to cheap AA’s. As hard as they try, they eventually wear out too. That leaves them angry and bitter, especially since I’ve never told any of my lovers what I am…until you.”