You are here: Products Pure: New World Magic Book One by Kim Alexander 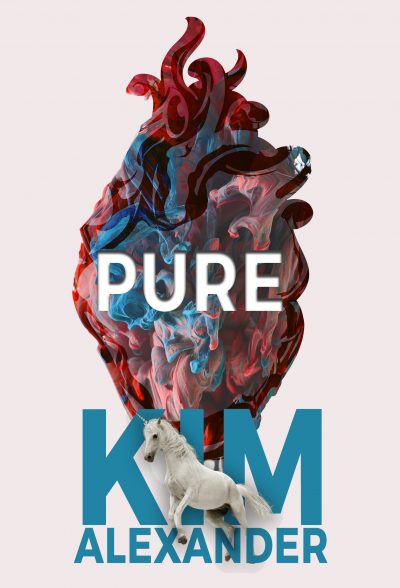 ‘A unicorn walks into a bar….’
That is not a joke.
Look, I’m a bartender, I have nothing to do with the xenos. I don’t care if it’s an elf or a vampire–as long as they don’t bother me, I steer clear. I have my reasons–you can see them in the scars on my neck.
I never wanted to get involved. But my life changed for the second time when I saved the life of a unicorn. I made an enemy of something old–old and evil, and whatever it was, it’ll be back for another try. I also made a friend when I decided to help March. He’s only been a human man for a day. I’m responsible for him now. He’s my friend…and maybe something more. Maybe a lot more.
It doesn’t matter to me that he isn’t magical anymore. I don’t care if he’s not PURE.
But he does.
From best-selling author Kim Alexander, a modern fairy tale of magic, love, and redemption.

Kim Alexander grew up in the wilds of Long Island, NY and slowly drifted south until she reached Key West. After spending ten rum-soaked years as a DJ in the Keys, she moved to Washington DC, where she lives with two cats, an angry fish, and her extremely patient husband who tells her she needs to write at least ten more books if she intends to retire in Thailand, so thank you for your patronage. Please visit her at kimalexanderonline.com

The inspiration for PURE has been hanging over my desk since I was about ten years old. I was lucky enough to have a mom who dragged me to the museums every weekend, and being a New Yorker, the museum was the Metropolitan Museum of Art. On one of those trips, I bought a print of The Unicorn in Captivity.

PURE is the story of a unicorn who is indeed in captivity: his name is March and he’s trapped as a human man. When I knew that was the story I wanted to tell, I had to figure out why he changed from an immortal, perfect creature to a mortal man, whether he liked it or not, and what happened next. That was my heroine, Ruby. She’s a bartender with a traumatic past and she saves his life–but it puts them both in deep trouble. After all, if someone went to the trouble of trying to kill a unicorn once, they probably won’t give up. So my unicorn (who is trying to figure out how to be a man) and Ruby (who is trying to figure out how to resist the charms of someone who is way more than he appears) are on the run, helped along the way by some friends, both magical and mortal.
Spoiler: Ruby doesn’t fight super hard to against March’s appeal. (I don’t blame her.)

The unicorn walked right past me.
Maybe it didn't notice me because I was standing behind my car. I know, a Mini Cooper isn't that big, and I was just standing there with my key in my hand and my mouth hanging open. But it didn't look my way; it just kept walking up the middle of Kenyon Street like it was an enchanted grove or something. It was getting close to 4:30 in the morning, so there wasn't any traffic, just some late-night drinkers looking for Ubers, and me, getting off my bartending shift at the Hare. I had to park two blocks away as usual, and I just stood there, watching as it went by. At the moment I was alone on the street, so no one else saw it. I couldn't move. I couldn't breathe. I didn't even think to take a picture.
When it was about a half a block ahead of me, I quietly stashed my purse under my car, hunched over and followed it, hiding myself on the other side of the line of parked cars. I didn't want to startle it, I guess. I looked up the street, and saw where it was going. Another block up, lit up by a streetlight, a girl stood in the middle of the road. She was slight, wearing skinny jeans and a gauzy blouse, and she looked young. She had a lot of blonde hair, and she had her hand held out, and the unicorn went straight to her. It stood in front of her and lowered its gorgeous head, and she laid her hand on its nose. Neither one of them noticed me, and I felt like I was looking at something private, something I ought not to be seeing. The unicorn, in case you've never seen one (which is actually pretty likely) wasn't anything like a white horse. I mean, it was horse shaped, in that Jon Hamm is monkey shaped, but you'd never mistake one for the other. It wasn't even white. It was silver, or mother of pearl. Its nose and feet were darker silver, and it was surrounded by rainbows shimmering off its body like they do over water sometimes. It did have a horn, though, and that was made of light. I can’t tell you what color, only that it was too bright to look at.
After a minute of the girl and the unicorn looking at each other, and me looking at them, three men in black clothes came out from the shadows between the cars. One had a rope. One had some sort of industrial looking oven mitts; elbow length ones, like glassblowers use. When I saw what else he had, I thought I was going to throw up. He had a hacksaw. The unicorn saw them, too, and it began to shiver. So it looked like the stories were true–the ones about unicorns and purity. I guessed right away the girl was a virgin, I remembered the story from those tapestries–you can still seem them, I think they’re hanging in a museum in New York. That’s how you’re supposed to be able to catch a unicorn–get a virgin to snare it. It sure looked like that’s what was going on, because as long as the girl was touching it, it couldn't move to save itself other than shift from side to side and stamp its feet. Two of them went to its head, and the guy with the gauntlets pulled the horn down far enough for the guy with the rope to get a loop around it. The other went to its side and put his hands on it, I guess to make it stop moving around. Black smoke blotted out the rainbows, and it began to make a noise that if I'm super lucky I'll never hear again. The guy slapped its smoking side and laughed. That guy had his back to me.
So I made a decision that honestly, I knew was pretty stupid, but wouldn't you have done the same? Wouldn't anyone?

Be the first to review “Pure: New World Magic Book One by Kim Alexander” Cancel reply