You are here: Products Protector (Anniversary of the Veil, Book 1) by Vanna Smythe 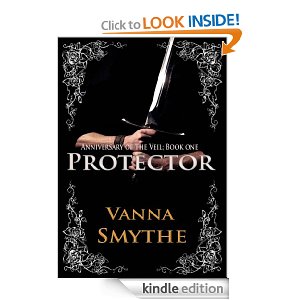 Protector (Anniversary of the Veil, Book 1) by Vanna Smythe

Duty versus love is the one battle Kae does not know how to fight.

Kae has trained his entire life to become an elite Protector of the Realm. When he finally achieves this honor he finds himself protecting something far greater: the Veil separating two worlds. On one side of the Veil lie unlimited stores of magic. On the Realm’s side, magic is all but obliterated, and Kae is one of the few who can use it. The priests who secretly rule the Realm will do everything they can to control his growing magical abilities. Kae’s willing to pay the price, even though it separates him from Issa, the girl he loves.But the Veil has weakened over the last thousand years and powers on both sides will stop at nothing to keep it intact. Strangers from the other side have kidnapped Issa to take her across the Veil and sacrifice her to strengthen it. Kae is the only one who can find her. Going to her rescue means forsaking his oaths and duty, and leaving behind the future he always wanted. But if he chooses duty over love, Issa will die.

Be the first to review “Protector (Anniversary of the Veil, Book 1) by Vanna Smythe” Cancel reply