You are here: Products Project Mothership by ash gray 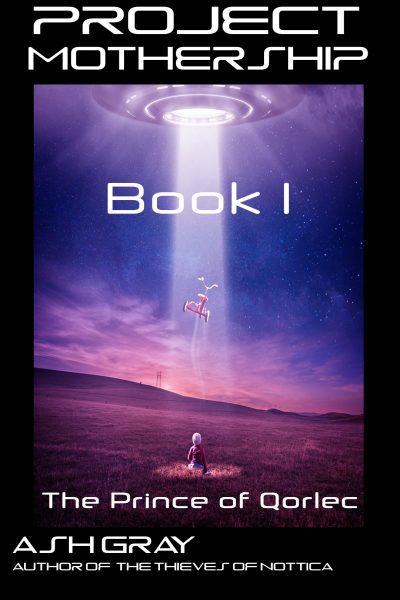 Rose, a sweet and kind librarian, is on her honeymoon with her goofy gym teacher husband when the trip takes a turn for the worst and she is abducted by aliens. When the spacecraft is attacked by the enemies of Empress Nashal, Rose makes it back to Earth freshly impregnated by alien royalty with said enemies on her heels. Now faced with running for her life, she is joined by Zita, a cheerful alien marine, and must make the choice between her unborn alien child and her baffled husband, who believes the child is his.

“Who are you!” Rose called, aiming her white weapon at the door. “I’ve gotta Stainmaker 2000! And I’m not afraid to use it!” She was a tad insulted when she heard the woman on the other side of the door laugh derisively.

“Your people just got cell phones less than two hundred years ago,” the woman said, unimpressed. “You think I’m scared of your widdle plasma pistols?” She sighed. “Look, Mrs. Carmichael –”

–
“Some of them are mech,” said Zita, nimbly picking her high heels through the steaming pools of red goo and severed, wriggling limbs. She was splattered with blood and grinning as she came to them, but she frowned to see the utter bafflement on Rose’s face. “Hey, snap out of it. Haven’t you seen mech before?” She kicked a man’s severed head, and Rose gasped when his face slid off, revealing a skull of gleaming silver metal.

Rose shook her head. “Mech are illegal. The government s-said they feared a robot war!” she insisted, turning to follow as Zita limped past her.

Zita laughed dryly, folding up her rifle and tucking it under her skirt. “Is it so hard to imagine your government lied? Governments tend to do that.”

–
“Drop. Your weapon. And. Come quietly,” said a robotic voice.

–
“I’m surprised you haven’t come to hate humans,” Rose said with hesitation. “I mean, given all that happened to you here. I’m pretty sure assimilating wasn’t easy either. You have a sort of foreign look for an American, and Americans are notorious for their xenophobia.”

Zita laughed softly. “Me? Hate humans?” She darkly shook her head. “I fought in the Midnight War for thirty years, Rosie. I know what happens when people let hate make decisions for them.”

Ash Gray is a dragon with minuscule spectacles perched on her nose, living in a wonderfully dank, musty cave far away in an alternate universe. She types her stories with gigantic claws on a ridiculously small typewriter before sending them through a membrane and into your dimension for your enjoyment.

An alien documentary about a woman whose engagement was ruined when she was abducted by aliens. Although my book is humorous, the actual documentary was very sad.

When Rose awoke, she could hear voices speaking quietly, and the room was so vast and so empty, they echoed off the walls in a whispered refrain. She went very still, too afraid to her open her eyes, listening with building dread to the whispers that surrounded her. She could feel that she was lying on a metal table, for its cold stung the back of her arms and her legs, which seemed to be bare in that chill room. She tried moving her hand, and when it did not respond, her brain flew into a silent panic and tears filled her eyes. She was unhappy to realize that she could open them if she wanted and squeezed them shut tight, too afraid of what she might see. Her heart thundered in her chest as she tried to imagine where she was, if she had been kidnapped . . . if Oliver was dead.

The voices fell silent, and somehow, without even looking, Rose knew they were waiting for her to open her eyes. She didn’t want to. She just wanted to wake up in her hotel room again, with Oliver beside her in bed, laughing and stuffing his face with popcorn as he watched tv.

“Rose,” said a man’s voice, buzzing as if from a speaker. “Open your eyes. It’s alright. You are safe.”

Rose swallowed hard. Somehow, she knew that voice, but she couldn’t recall where she’d heard it before. Her eyes slowly fluttered open, and her heart shrank to see the man standing over her. He was wearing a tropical shirt and a pair of khaki shorts, and her lips parted in surprise when she recognized him as the young man from the bar, only now his eyes were solid black instead of warm brown. His golden brown skin appeared dusky in the dim light, and matted blonde locks fell twisted into his eyes, which reflected the overhead light like black water.

The room was very dimly lit, but straining to look past the bartender, Rose could see the curving walls were lined with bean-shaped pod after pod. The translucent green sacks were each glowing at the center, their ghoulish light pulsing as if with the heartbeat of the black-eyed fetuses contained in each one. The unborn were curled and gurgling softly, a strange warbling sound that rose like a background buzz in the vast chamber.

As she glanced around, Rose realized her table was in the very center of the room. On a table beside her, the corpse of a dead woman was stretched, and Rose went still, staring at that body in silent dismay. The woman was beautiful, with smooth brown skin and pale blonde hair, high cheekbones and full lips. She was wearing what looked like a white hospital gown, and glancing down, Rose realized she was wearing the same garb.
The dead woman’s eyes were barely open, solid black orbs that stared in frowning agonies she could feel no more. The front of her hospital gown was bloody and her legs were up in stirrups, as if she had died in childbirth.