You are here: Products Professor Love by Nikky Kaye 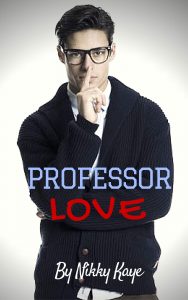 A former Communications professor and journalist, Nikky Kaye has been writing professionally for 25 years–but never about heartbreak or happy endings until now. Her experiences with Hollywood actors, Ivy League brainiacs, the United Nations, and her own 5 year-old twin boys have trained her in how to deal with conflict, greed, power, and motivation. It is the latter that she searches for almost daily, when she’d rather be hiding in bed with a book and a bucket of M&Ms.

I’m a lot less idealistic and naive now, but the search for a HEA is still appealing. Now that I’m all grown up (or at least more disillusioned), I’m enjoying writing shorter (and MUCH sexier) stories (coming to Amazon soon).