You are here: Products Private School Seduction, Part One by Loren Davis 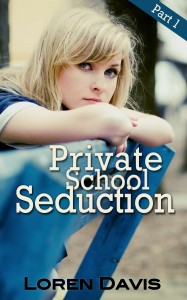 The students of Fayetteville Prep can’t keep their hands to themselves, and now the teachers and parents are getting involved, literally. All’s fair in love and war, but a new, darker influence is working its way through the bedrooms of Fayetteville. Join Lisa and Derrick and their friends as they navigate the tricky world of adult fantasies in Part One of Private School Seduction.

Aside from writing he likes to daydream, eat BBQ, and read poetry. The best things in life, he believes, take time to digest. He hails from the American South. His new favorite musical group is Sara and Tegan.

I’ve always been drawn to the eroticism in my art, whether it’s writing or filmmaking. Private School Seduction is my first novella length foray into prose erotica.

Be the first to review “Private School Seduction, Part One by Loren Davis” Cancel reply