You are here: Products Prince of Hearts by Margaret Foxe 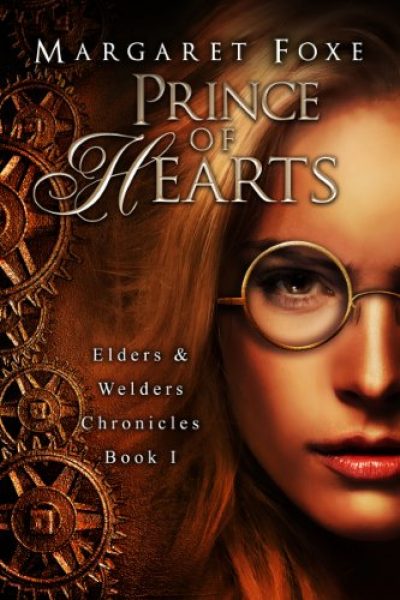 Prince of Hearts by Margaret Foxe

Book One in The Elders snd Welders Chronicles

London: 1896. Airships rule the skies, and automatons run the tracks at Ascot. Since the Great Exhibition of 1851, Her Majesty’s Empire has been powered by the Steam Revolution and Welding science. It is a time of glorious innovation and dangerous civil unrest.

But Miss Aline Finch, prim, plain career girl, has more important things on her mind than the state of the Empire. After her employer, the handsome but insufferable criminologist, Professor Romanov, hares off for parts unknown in a slightly-illegal dirigible, stranding her in France, she has finally had enough. In a fit of pique, she decides to marry her long-time and very proper suitor, quitting Romanov for good.

The last thing the Professor expects to come home to is his secretary’s mutiny. Finch’s timing couldn’t be any more inconvenient, for a serial murderer from Romanov’s past has set his sights on her. Romanov must keep her close if he has any chance of protecting her life – and the dangerous secrets the murderer threatens to expose. For the Professor is much, much more than he seems, and the secrets that he keeps are centuries old – and hidden deep in his heart.

When the Professor discovers Finch is to wed, however, he is forced to confront the truth of the matter: he doesn’t just want his secretary back to protect her. He wants her in his bed. Forever.

Aline fights Romanov’s seduction, but she’s no match for her own unruly desires, or the truth of her own heart. But when the Professor’s true identity is exposed, destroying the very foundations of Aline’s conception of reality, will the Professor lose her forever? Or will the murderer succeed in his evil plot to destroy them both before they can find their happy ending?

Warning: this sensual romance will put the steam in steampunk.

She hopes to one day circumnavigate the world by dirigible.

Find out this fall!