You are here: Products Prey for The Dead by Susanne Leist 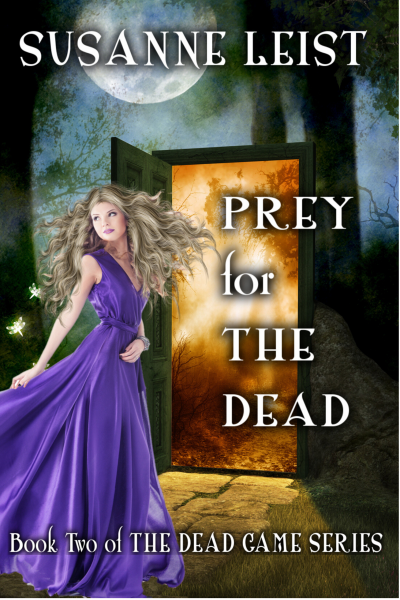 Prey for The Dead by Susanne Leist

Linda Bennett’s dreams of happiness have always eluded her. Five years ago, she moved to Florida from New York to escape heartache. The Dead vampires and their leader, Wolf, had ruined any hopes of peace for her and her friends. Surrounded by vampires and hybrids–human vampires, Linda finds solace in her bookstore. Then one morning, the lights go out and an explosion rocks her shop and any future dreams for a happy ending.

Have The Dead and Wolf returned to exact their revenge on Oasis?

Linda and her close friends–Shana, David, and Louise–race to where lightning converges on an isolated spot behind the town. A sinkhole replaces End House’s former site. Around the hole stand The Watchers–the vampire police, the group of five hybrids, and The Elders–the local vampire leaders. Echoing from inside the dark pit are the voices of Father John, the vampire hunter, and Abe, the head Watcher. Trapped with them in the tunnels below Oasis is the magical door that controls time.

From this moment, Linda and Shana become embroiled in the twisted escapades of Todd, Sheriff Sam, and The Elders as they search for The Dead at an exclusive club in Disney World. Death and mayhem follow their every step. A masquerade ball and a romp through the tunnels lead to a showdown in the swamps of southern Florida.

Can Linda choose between Gregg and Todd–the two hybrids who compete for her heart and are at war on opposing sides? Will she find her happy ending?

Will Oasis survive the battle between good and evil?

I have always loved to read. Agatha Christie, Alistair Maclean, Robert Ludlum, and many other authors filled my young imagination with intrigue and mystery. When I wasn't reading late into the night, the TV shows–Murder She Wrote and Columbo–entertained me with tales of murder and suspense.

Over the years, my taste in TV expanded to include such shows as Supernatural and The Originals. I searched for paranormal, murder mysteries, but found few at the library or bookstore. So, I wrote one.

The Dead Game, Book One of The Dead Game series, brings fantasy and the surreal to the classic murder mystery with dead bodies, suspects, and clues. It offers vampires, vampire derivatives, and a touch of romance to spice the motley mix.

The story continues in Book Two, Prey for The Dead, as The Dead vampires use an exclusive club in Disney World to infiltrate the rich and famous. As The Dead grow in power, not even the bright sunshine of Florida can weaken them. Linda, my main character, and her friends join forces with human vampires–known as hybrids–to defeat the evil threatening to control Oasis. A masquerade ball and a romp through the tunnels beneath the town lead to a showdown in the swamps of southern Florida.

A career in writing has been a big leap for me. Accustomed to the number-crunching field of budgeting and the hectic commodity markets, I left my first career and M.B.A. in Finance behind to pursue my dream. I do not regret my foray into literature for one moment. Fellow authors helped me make my way through the competitive field. I write every day and even tried my hand at poetry. If someone tells you it's too late in life to try something different, they are wrong. It is never too late to follow your heart.

My over-active imagination inspires my book series. I close my eyes and imagine the book I want to read. Then I write it.

Linda followed him to a swing suspended between two palm trees, overlooking the deserted beach. They settled into the cushions. Gregg pushed off with his long legs, and they swung back and forth. Linda let her eyelids drift closed and sighed. He placed her hand across his lap, covering it with his warm one. She listened to the sound of the waves, smelled the sea, felt the muscles of his thighs ripple with each push, and tasted the salty air. Her senses were engaged. Her heart rate slowed to the steady pulse of the swing. “You’ve mesmerized me.” Gregg lifted her hand and kissed her fingers—one by one. “Your wish is my command.”
“And I thought you were the one bewitching me with your powers.”
“Me? I can’t entrance anyone but only suggest. I wish someone took my suggestions as commands.
His eyes locked on hers. Linda’s throat constricted to where she couldn’t swallow.
“Maybe you don’t suggest hard enough.” Linda drew a shaky breath.
“I’ll try harder.” Gregg stood, offered his arm, and helped her from the swing. His arms around her waist, he pulled her close. “Linda, be my sweetheart.”
His face lowered to hers, and he kissed her in the moonlight, under the palm trees. Their tongues caressed each other until she gasped for air. She opened her mouth to speak.
Gregg placed a finger on her lips. “No talking or analyzing tonight. I’ll always be here for you and won't let anyone harm you. I want us to enjoy our time together.” He brought her back into his arms and kissed her until the sound of a throat clearing broke them apart. “It’s you.” Gregg sounded angry.