You are here: Products Prevarication, Deceitfully Yours by Monica Smith 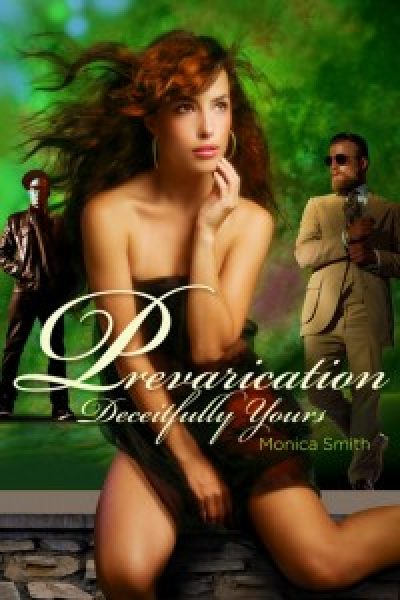 Prevarication, Deceitfully Yours by Monica Smith

Jessica is a young and beautiful nursing student who falls in love with Justin, a guy that she met at a party. Although, he fulfills her needs mentally and financially, she longs for a little more excitement in her bedroom.

While attending nursing school, she gets involved with her pharmacology teacher. With Denver, her sexual appetite for the kinkier things are satisfied. There’s only a couple of problems that interfere with her happiness. One, Denver is married with two daughters that attend the same college as she does. Second, although her body craves the more experienced Denver, her heart belongs to Justin.

During the unforeseen events that happen in Jessica’s life, she has one person that she can turn to, her best friend, Kayla. She becomes the clarity in Jessica’s twisted love life once the intense drama of her two relationships become front page news, and one of Jessica’s love interest is found to have been murdered.

She claims she may not actually do what she writes about, but she feels a connection to it and enjoys the thrill that drives her to see her stories through to their exciting climax and conclusion.

Jessica and Kayla both were awakened by someone beating on their door. And then they heard, “Tell Jessica she has a phone call.”
Jessica slowly rolled out of her bed and slowly walked two doors down the hallway to the phone. As she passed the girl who answered it, Jessica looked at her and asked in a scratchy voice, “You couldn’t take a message for me?”
“Nope, I’m not your secretary. Tell your man friend to call at a later time,” the preppy young girl snapped, walking back to her room and shutting the door behind her.
“This is Jessica,” she announced.
“I didn’t mean to wake you. I thought you would be up by now. It’s eight o’clock.”
“Justin?” Jessica asked, now fully awake for the phone call.
“Yep, I called to ask you to have lunch with me today.”
“Sure, but it would have to be a late lunch. I don’t get out of class until two-thirty,” Jessica informed him, fixing her hair as if he was standing beside her.
“No problem. Can I pick you up at the dorm or would you like to meet me someplace?” Justin asked.
“You can pick me up here, if you like. I don’t mind,” Jessica replied hastily.
“Then it’s a date. I will be there around five or five-thirty,” Justin said before hanging up the phone.
Jessica walked back to her room, slowly. She knew by this time Kayla would be up and wondering who was on the phone. As she opened the door to their room, Kayla popped up like a Jack-in-the-box. Her slanted brown eyes were opened as wide as she could get them, and Jessica had all of her attention.
“Who was on the phone?” a curious Kayla questioned.
Jessica sat at the desk and fumbled with some papers. She pretended that she did not hear Kayla.
“Who was on the phone?” Kayla repeated in an irritated voice.
“Nobody,” Jessica teased. “Just Justin calling to ask me out on a date today,” Jessica answered, looking at Kayla with her bedroom eyes.
“No way!” Kayla yelled.
“Yes way.” Jessica laughed. “But education first,” Jessica said, getting up from the desk and going to the shower.
“I am so jealous,” Kayla admitted, falling backward in her bed.
Both Kayla and Jessica had Mr. Washington’s pharmacology class, so they usually walked there together and sat beside each other. But on this particular day, Kayla skipped class to spend time with Chase. Jessica wasn’t too worried about Kayla failing a test, because her mind was like a camera. Kayla would look at her assignments, read the material once, and then the day of the test, she would pass with flying colors.
Jessica walked into her class and took her normal seat towards the back. She pulled out her book and material and read over the list of medications before class began. Jessica made it a priority of hers to always arrive to each of her classes at least forty-five minutes early.
“Ms. Milner, early as usual,” Mr. Washington stated as he walked through the door carrying his briefcase. “Where is your better half?” he questioned, walking to the back of the classroom.
“Would you believe me if I said she was out with the flu?” Jessica joked, looking at Mr. Washington’s inviting brown eyes.
He smiled at Jessica and politely said, “No.” Once he arrived at her desk, he stood slightly behind her and leaned over her shoulder and asked, “Are you having any problems with the medication list?”
Jessica became aroused by the smell of the Irish Spring soap on his body. Although he was not touching her, she could feel his breath as it tickled her neck. “No,” she whispered, trying not to turn and look at him. Jessica didn’t feel uneasy. She felt desirable.
Mr. Washington reached around her arm, barely touching it, and turned the page. “What about these medications?” he whispered back to Jessica, now looking at her.
Feeling him slightly touching her arm sent massive chills through her body. “Maybe,” she replied, now turning to him. Jessica looked Mr. Washington in his eyes and felt that they were knowingly pulling her in, and his body language was delightfully enticing, as she took the time to look him over.
Mr. Washington picked up a pen that was laying on her papers and wrote some numbers without breaking eye contact. “Use this for tutoring services,” he told her in a very encouraging low voice. “But keep this to yourself,” he warned.
“Of course,” Jessica agreed, with her heart beating fast as if she had just run a race. “Our secret,” she whispered, arching her back to make Denver notice her perfectly perky breasts and crossing her legs seductively.
Mr. Washington glanced at the clock on the wall and knew his students would be entering the class at any moment, so he stood up slowly and walked back to the front of the class. Jessica watched attentively as he strolled back to the head of the class with one hand tucked in his pocket. She watched him as he wrote on the black board, taking the time to personalize each stroke.
Jessica had naughty thoughts racing around her mind like a Kentucky Derby race. She felt that he had just invited her to play on his playground.

Be the first to review “Prevarication, Deceitfully Yours by Monica Smith” Cancel reply