You are here: Products Pretty Girl by Amy Heugh 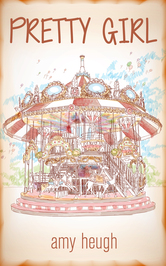 If there were one day that she could change it would be the day she was taken.

After her parents’ divorce, seventeen-year-old Izzy Scott and her mother move to the old town of St. Augustine to begin a new life, a life beyond the media attention and the memories of the traumatic experiences that left an everlasting affect on their family.

The former ballerina is trying to adjust to the outside world without suffering a panic attack and exposing who she is – all while getting through her senior year at a new school. That’s easy to say until she meets local boy Mason Winchester, a boy with a tragic past.

Mason has a reputation for violence, but a love for motorcycles. At the age of eleven he lost his mother to cancer and from then he has been running from something, but could never really get away.

Like any other angry teenager, he just wants to be left alone and to have nothing to do with anyone else because he believed that he had nothing to offer. That changes the moment he saw what was in the new girl eyes.

Tragedy wasn’t new to either of their lives but among the secrets and the memories the one thing they both never excepted was to find hope.