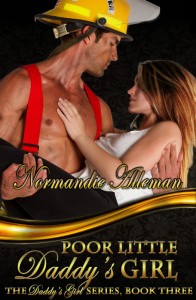 Twenty-four-year-old Charmaine Bainbridge appears to have it all—beauty, fame, and tremendous wealth—yet behind all the glitz and glamor hides a sad little girl who has been abandoned by every man she’s ever loved.

When firefighter Hunter Baldwin saves Charmaine from a fire in her penthouse apartment—a blaze started by her own carelessness—he’s appalled by her nonchalant attitude. Forced to carry her to safety, he throws her over his shoulder, but not before correcting her behavior with a well-deserved spanking. Something about Charmaine arouses him deeply, and it isn’t just her gorgeous looks. This girl needs to be firmly corrected and thoroughly dominated, and a part of Hunter demands that he be the one to take her in hand.

Though he’s used to charging into burning buildings on a daily basis, Hunter knows taming Charmaine’s wild ways may prove to be his greatest challenge yet. Undeterred, he takes on the role of Charmaine’s daddy dom in hopes of breaking down her defenses and healing her wounds. But can she bring herself to open her heart to him, or will she remain the lonely little rich girl forever?

A former psychologist, Normandie has always been fascinated by human behavior. She loves writing quirky characters that are all too human. Fiber arts, baking, and Pinterest are a few of her favorite pastimes. She lives on a farm with a passel of kids, an adorable husband, and a pet pig who’s crazy for Red Bull.

Sexy firefighters everywhere and the “celebrity” heiresses who are splashed across the tabloids all the time.