You are here: Products Plight of the Wren by Mary Elizabeth Fricke 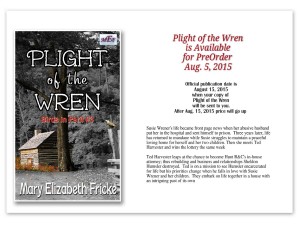 Plight of the Wren by Mary Elizabeth Fricke

PLIGHT OF THE WREN #3 In the Birds in Perils Series

Susie Wrener’s life became front page news when her abusive husband put her in the hospital and sent himself to jail. Three years later, life has returned to mundane, while Susie struggles to maintain a peaceful loving home for her two children as a single mom. Then she meets Ted Harvester and wins the lottery in the same week…

Ted Harvester leaps at the chance to become Hunt R&C’s in-house attorney; thus, rebuilding the business and relationships Sheldon Humsler destroyed. Ted is on a mission to see Humsler incarcerated for life, but his priorities change when he falls in love with Susie Wrener and her children. They embark on life together in a house with an intriguing past all its own.

The house called to them from the moment they first saw it. They were told the elegant log house possessed a history of love and companionship among friends. Gossip revealed the property also held a tale of secrecy and murder. The previous residents were said to have vacated out of fear of something dark and evil that patrolled the woods surrounding the house.

Susie and Ted ignored the warnings until strange occurrences began to take place. The creepy feeling of being watched; an ominous depiction of their wedding being left on their computer while they were away on their honeymoon; a cup from a heirloom tea service filled with red dye and left where it would easily be toppled…and…the bottle of wine they believed friends left in their refrigerator.

After being forced to spend a night in the hospital (as the result of drinking poisoned wine), they enlist the help of Hunt Security and are told every room in their house is ‘bugged’. Cameras installed in the ceilings and microphones behind furniture, are controlled by a remote computer. Every incident and conversation of their short time living in this house has been observed by an intruder not of the ghostly kind.

As Ted and Susie continue to question who has been spying on them and why, they also embark on an embittered battle to retain custody of Susie’s two children. Ghostly bumps in the night take the form of very real intruders. Old enemies return in dreams as well as human form to reveal a history of this house no one ever imagined.

My lifelong ambition to write and publish fiction became reality when Pigeon in a Snare ‘the 1st in my romantic suspense series, collectively titled ‘Birds in Peril’ was published by AKW ebooks in May of 2014. #2 in the series, ‘Roses for the Sparrow’ was published in Oct, 2014. Unfortunately, the owner/publisher of AKW ebooks retired at the end of 2014 and AKW closed its doors. Rather than seek another publisher, I chose to try the world of Independent Publishing. The result is #3 in my ‘Bird’ series, ‘Plight of the Wren’. Plight of the Wren is to be officially published on Aug. 15, 2015 and is available for pre-order as of Aug. 5, 2015

When I began to write Pigeon I had no idea the story would develop into a full series. But the characters keep calling to me. They just will not give me peace until ALL of their tale is told. While each new title has separate primary characters and a ‘private’ story between two new lovers, the old characters remain in the background, the specter of Humsler (fear of his wrath) hovers over everyone. So, in the end, separate stories connect to one long tale of romance, suspense, mystery and love between family and friends who stick together against all odds…and the enemy