You are here: Products Pleasure Pain or Purpose: Book One- Pleasure by Al Daltrey 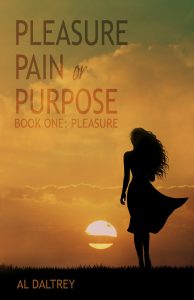 Pleasure Pain or Purpose: Book One- Pleasure by Al Daltrey

If you decide to read my book(s), I truly hope you enjoy it.

A thick envelope full of paperwork arrived the next morning. Having been delivered by a lawyer, she didn’t have to look inside to know what it contained. The whole thing gave her an ugly feeling inside. The multi-national mining company that David had worked for, MGGP Minerals, had been more than fair. The accident happened on company time, while David was visiting a mining site that was on the verge of going into production. As a V.P., he had a lot of stock options, which had tripled in value during his tenure. He was also heavily insured both personally, and professionally. All told, Biljana Stevens was getting a settlement worth $6.4 million dollars. At only 28 years of age, it was enough that she didn’t have to work another day for the rest of her life.
She signed the series of documents, all the while thinking that she’d happily trade in every penny of the money, if she could just get David back. But life doesn’t work that way. Life charts its own course. You have some control over it, but barely. At best, you’re a backseat driver. You can make insistent suggestions and requests, but ultimately life takes you wherever the fuck it wants.
Biljana was now quite rich, but barely alive. Physically she was present, but emotionally she was vacant. She would lie awake most nights with no regulated sleep schedule. The only time she put on a brave face, was when her mother called from Seattle. “Oh, I’m okay Mom,” she would say, trying to sound upbeat. “I’m going to go for a nice long walk today.” In reality, this meant she was going to walk to the elevator, and then down to get the mail. The color had left the sky in her world. Food tasted bland. Music became muzak. Movies helped simply because they had pictures and sound. Books were okay too, except oftentimes she’d have to re-read a page because her mind had drifted off somewhere else, as she lost track of the story.

Be the first to review “Pleasure Pain or Purpose: Book One- Pleasure by Al Daltrey” Cancel reply