You are here: Products Pleasure Intense by Ju Ephraime 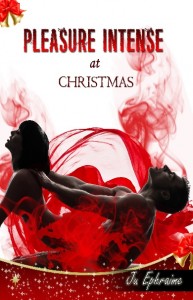 He wanted her from the first touch of her hand. He vowed then that he’d have her. Now, this Christmas, two years of planning will come to fruition and he’s anticipating taking her in every position possible, and there are many. They’ll have an entire day and night to try all sixty-four. The Kamasutra be damned!

She’s not in the market for a casual relationship it’s not her style, but that’s just the kind of relationship Pete Altman is into… love ‘em and leave ‘em. Morina Morgan is determined not to play his game, that is, until fate, in the form of a blizzard, stranded them together on Christmas Eve. Now all bets are off… Can she stick to her guns and resist the tempting gift he presents her with … HIMSELF? Or will she give in to what promises to be nothing but pleasure intense?

An avid reader of high heat romance for more years than I care to remember has transitioned into a writer of the same.

A Christmas anthology I will involved with.

When light flooded the room, she quickly closed her eyes. When she opened them again, she could not believe the sight that met her eyes. Pete was standing at the foot of the bed, as beautiful as a bronze statue. Only this bronze statue was very much alive, judging by the massive erection he was sporting. He had the most beautiful cock she had ever seen. It was long and thick with a pointed head that was wonderfully circumcised. It broadened from the middle part to the base. He had his hand around it, and even in his large hand, it appeared huge. It turned her on like nothing she’d ever seen before.
The sight of Pete holding his penis would be imprinted on her brain forever. He had a gorgeous body without one strand of hair. His shoulders were broad, and he had a narrow waist. His balls were tight in the sac, which was wrinkled and drawn up close to his body. The massive columns of his thighs were spread apart, and his cock protruded away from his body like a weapon. The term “well-endowed” came to mind.
“What are you doing here?” they both said in unison. As she sat up in the bed holding the bed covers against her, he just stood there, as cool as a cucumber, making no attempt to cover his nudity.
“What am I doing here?” she repeated, indignantly. “Did you forget I had an appointment with you to buy this house? What are you doing here? And how long have you been living here?”