You are here: Products Playing Dom by Sky Corgan 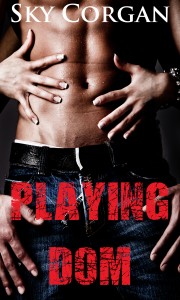 What happens when someone steps into the lifestyle blindly? Talia is about to find out. It seems like all fun and games until she pairs up with the wrong Dom.

Micah has been out of the lifestyle for a while. He’s down on his luck when it comes to finding stable submissives. They either leave him or want more than he can offer.

After going home to tend to family matters, Micah tries to get in with the local scene, feigning disinterest all the while. But when an enemy from the past shows up to pollute his good time, it becomes a game of wills and perseverance. Talia is caught in the middle, torn between fear and desire, pleasure and pain, and intrigue for the new stranger who could either be her savior or her undoing.

Sky Corgan lives in a little podunk town near San Antonio, Texas. When she’s not typing away at the next steamy romance novel, she’s busy planning for future vacations. Originally a horror author, sex scenes and love stories kept magically creeping into her work, so she decided to make the switch to romance. Now she enjoys writing stories that make your heart flutter and your inner yearnings awaken.

Personal experience with my own search for a submissive.