You are here: Products Pistol Whipped by Stefanie Graham 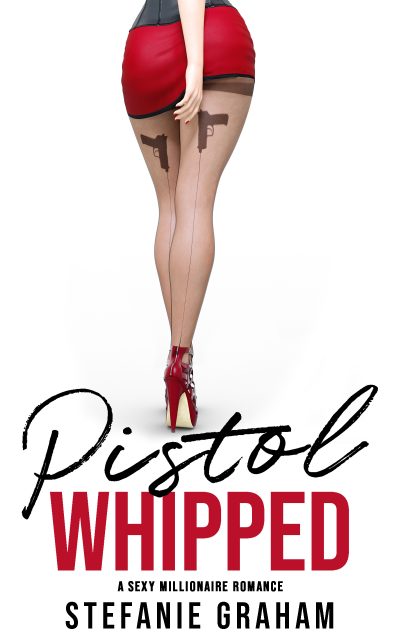 Whipped ~ When a dominant woman has a man do anything she desires.

Leave it to Austin DeAngelis, magnate, mogul and bad boy millionaire, to fall for a woman rumored to be composed of cold, hard steel. Hard target Kylie Derringer, like the gun that shared her last name, was small with cool curves, sleek feminine lines, and a seemingly impenetrable exterior. When a case of corporate espionage threatens the health of Austin’s company, all fingers point to his bold-as-brass employee as suspect number one.

Tangled in a web of lies and deceit, Kylie finds herself in the middle of a dangerous game between new love and old loyalties. The business of passion isn’t a game. When lies, lust, and love burns hot, can love survive its bad name?

STEFANIE GRAHAM made her first attempt at writing romances at sixteen. She spent her proceeding years dreaming of ways to create the essence of passion and desire between pages filled with sultry and exciting text. She is a voracious reader, a fan of the written word in all forms and is happiest when curled up in a corner with a good book. Her goal is to create quality multi-genre titles that will capture the imagination of her readers.

Stefanie enjoys traveling above all else and plans to visit every corner of the earth. Until then, she calls the East Coast her home. Stefanie would love to hear from you. Visit her at www.StefanieGraham.com

My main character’s name is Kylie Derringer. The Derringer handgun was the smallest usable handgun of the nineteenth century, which is what made it popular with the ladies of that era. The pistol was easy to conceal and beautifully crafted. The diminutive and dainty piece of steel was innocuous enough to fool the unsuspecting into thinking it was anything other than a lethal weapon.

The romance was inspired by the modern tale of my heroine Kylie, who is a woman with a lot of emotional barriers. She encases her heart in a protective shell, which leads to rumors that she is icy and cold-hearted. Austin, her love interest, is a man that when it comes to relationships, is more than a little gun-shy. The soundtrack that played in my head for this combustible duo was the classic Bon Jovi song called, You Give Love a Bad Name. A character named after a gun with a built in theme song was all I needed to get my pen moving over the page.

“Who is that?” Austin DeAngelis asked as his second-in-command entered his office, interrupting his voyeuristic moment.

Brixton Castlemaine glanced over his shoulder. “That’s Kylie Derringer-DeValle, your senior technical writer,” he answered his friend and boss cheerfully. “She’s the best documentation specialist this company has ever had, but she is a little hard to get along with.”

“So I see.” Austin’s eyes swept over what he imagined were lush curves hidden beneath an oversized cardigan.

Brixton waved his hand in front of his friend’s face to divert his attention. “I know what you’re thinking. Forget it,” he advised. “Kylie is more than a handful. She has a tongue like a serpent, a mind like a steel trap, and an attitude that will stop any man cold. A pretty package on the outside but she has a disposition that will tear a man’s balls off.”

Austin threw his head back and exploded into laughter. “You’ve been here less than two months to oversee this takeover and you know her that well already?” He couldn’t help but be intrigued.

His friend’s grimace spoke of thwarted romantic attempts and Austin laughed even harder. Shaking his head, he said, “Thanks for the warning. No need though. Although I just acquired this company, I’m still the new kid on the block. Somehow, I think dating my female employees is a bad way to start. Besides, you know I like my women tame, quiet, and biddable. From the looks of that troublemaker, she doesn’t have my required temperament.”

Austin’s eyes slid compulsively back to the woman who sat, seemingly comfortable and at home, stuffed in a tiny cubicle away from everyone else. “She is beautiful though,” he said absently. His eyes caressed her from the top of her shining hair to the tips of her toe-stomping combat boots.

Brixton grunted at this assessment. “Yeah well, an AK-47 is beautiful too, but that doesn’t mean I want to put my face in front of one.”

“Good point,” Austin admitted. “I wonder, though, how one very tiny woman can put so much fear into the hearts of a company full of men.”

“You don’t have to wonder. Let me introduce you. I’m curious to see if like the other women in your life she’ll take one look at you and fall on her back with her legs spread.” Brixton’s tone was clearly skeptical.

“Goes to show how much you know,” Austin chuckled. “Instantaneous spread-eagle is both vulgar and atypical. The women of my acquaintance are ladies. If legs are spreading, it’s done with style.”

Brixton rolled his eyes and made a sweeping gesture toward the door with his hand.

“Fine. Whatever,” Austin agreed. He accepted the silent challenge. His expression suggested boredom, but he felt goosebumps on his skin.

She was even more beautiful up close. Everything about her was pint-sized. She had a small nose, tiny hands, a petite figure, and little feet. What was big about her were the things that could make any healthy man salivate. She had big metallic-grey eyes — the color of steel and storms, a luxurious mass of honey and copper-colored hair, and breasts that would be average on most females but were immense on a frame no bigger than a child’s. Separate, her attributes were disproportionate and uninteresting, but together they were the stuff of a Playboy magazine centerfold. He could tell she would be easy to pick up and position and
… Austin snapped his mind back to the introduction at hand. He’d always had a weakness for beautiful women but one this tiny was out of the question. He stayed away from petite ladies. In his experience, they generally couldn’t handle him sexually. He was a big man, not just in height, so he preferred bed partners who’d been around, knew the ropes, and liked a challenge. Everyday women had a hard time; a woman the size of this one, would make what he wanted to do to her impossible. The care it would take—the patience. He’d have to go slow, prepare her properly and even then, a pleasurable outcome wasn’t guaranteed. Austin sighed and let the thought slip away. It was pointless fantasizing. It would never work. He knew it, but still, he couldn’t help himself. His gaze drifted back to his new employee and his eyebrows shot up with surprise when her eyes met his.

She was scowling. Not scowling exactly but her expression was partly a grimace and partly a baring of teeth. Eyes narrowed and mouth pursed, she slowly, deliberately closed the edges of her sweater with a jerk, blocking out his gaze. Despite the dubious start to their acquaintance, Austin still awaited the inevitable blinking look he usually received when the opposite sex got the first good look at his face. Her expression didn’t change. It was just short of openly hostile. Austin was momentarily disconcerted. Not every woman found him attractive but ninety-five percent of them did. He took it for granted. There were women who weren’t affected by his looks, but those individuals were rare. For instance, ninety-year-old grandmothers sometimes didn’t bat an eye; they were too old to care. Sometimes, ladies who loved the ladies didn’t look at him twice. Even then he’d been able to convince some of these women that they could find pleasure by switching back to the other side, if even briefly. He had that effect on women, but apparently not on this one.
A smile of amusement instantly lit his face. She hated him…on sight. How interesting.

“Nice to meet you, Ms. DeValle,” he said, recovering gracefully. “I hear you are the best writer that Avion Industries has ever had. I’m pleased to have such a talented staff member on my team.” Despite himself, Austin gave her the ten-volt lady-killer smile.

“My name is Ms. Derringer. I don’t use the second surname anymore,” she explained firmly, looking him directly in the eyes. Their gazes battled for a second more before Kylie turned her chair back towards her computer screen. Apparently, the conversation was at a close.

“Derringer. Isn’t that the name of a nineteenth-century gun?” He was doing his best to draw her attention back to him. “If I’m not mistaken, it was the smallest useable handgun of its time which is what made it popular with the ladies of that era. Easy to conceal and beautifully crafted; a diminutive and dainty piece of steel innocuous enough to fool the unsuspecting into thinking it was something other than a lethal weapon.”
Her chair slowly spun back around. The eyes that stared at him showed surprise — the barest hint of interest.
Austin quietly patted himself on the back for having a head for inconsequential details.

Austin heard Brixton draw in an astonished breath. At that moment, he was aware that he had accomplished the impossible — gaining Kylie Derringer’s full attention.

Austin unconsciously turned up the voltage of his smile. “I dunno.” He shrugged. “I think I read it somewhere. I didn’t know at the time the information would come in handy.” Despite himself, his eyes slid over her appreciatively.

The interest in her eyes died by degrees. “Well,” she said contemplating him through narrowed eyelids, “it’s good to know that the new owner can read.” With that, she swiveled her chair back to her screen again and silently dismissed them.