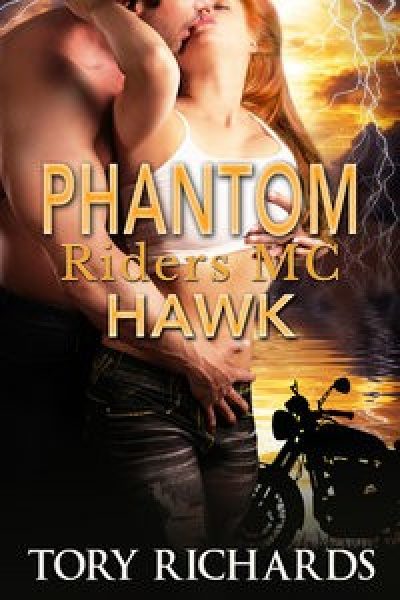 Ultimate betrayal leaves Hawk, the president of an outlaw motorcycle club, distrustful and hating women. He only wants them for one thing now, and once he’s satisfied his animal urges he casts them aside without a second thought. But then Audra shows up, threatening his club and his way of life, and Hawk has to decide to turn the sexy, pint-sized package of trouble loose, or claim her for his own.

Penning stories by hand and then on manual typewriter at the age of thirteen, Tory was a closet writer until the encouragement of her family prompted her into submitting to a publisher. She’s been published since 2005, and has since retired from Disney to focus on family and writing.

I have a good friend who’s son belongs to a MC and after reading other MC stories fell in love with the genre and decided to write my own.

I quickly scooted out of the booth, realizing Hawk was right behind me. Before I could question him, he grabbed my arm and proceeded to jerk me in the direction leading to the back of the bar. I glanced around the bar wildly, but I didn’t see Dane’s men anywhere.
“They left, but they’ll be back.” We entered a dark hallway and halfway down he stopped us at a door. I expected him to knock, but he lifted his leg and kicked the door in, causing the occupants in the room to scream out in fear. “Out!” he snarled.
I barely had time to acknowledge the naked couple before they snatched up their strewn about clothes and rushed past us. As the man passed me I recognized him as one of Hawk’s men. We made eye contact long enough for him to wink at me. Once they cleared the threshold, Hawk pulled me inside and slammed the door behind him.
“Take your clothes off.”
“What?”
“Take your clothes off.”
I know my jaw dropped at his demand. When I realized that he meant it I began to back up, slowly shaking my head. “You’re crazy!” I whispered sharply.
“Take your fuckin’ clothes off!” So far he hadn’t moved from his spot, yet I’d backed up until my back was against the wall. “Those men knew how to find you, which means there’s a bug on you somewhere.”
I tried to decipher what he was saying, but my brain wouldn’t wrap around the words that he thought I had a bug on me. He took a menacing step toward me, and that was all I needed to do what he wanted. Strangely, I wasn’t afraid of Hawk, only of what having his hands on me would make me feel. I was attracted to him in a strange way that left me feeling confused. Maybe it was because I knew that he wasn’t attracted to me.
I quickly removed my hoodie and handed it to him, kicking off my shoes at the same time. As Hawk began going over it, I unzipped and rolled down my jeans. I’d reached for the bottom of my t-shirt when a memory slammed into me.
“Just a minute.” I waited for him to look at me. “There’s no way there can be a bug in these clothes because they aren’t mine. I took them from a dryer in the laundromat.”
He hesitated for only a second. “I want everything.”
Deciding not to argue with him, I removed my t-shirt and threw it at him. He caught it to his chest and I swear I saw the tiniest curve of his mouth showing amusement at my irritation. He examined my clothes thoroughly, finding nothing, as I’d expected. Then he turned those dark eyes on me, running his gaze up and down my body, missing nothing.
“Everything,” he demanded. “Or did you borrow your underwear, too?”