You are here: Products Personal Foul by Lucy J. Madison 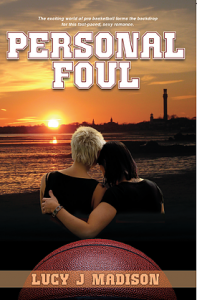 Lucy J. Madison is a novelist, poet, and screenwriter from Connecticut. She’s the author of Personal Foul, a contemporary lesbian romance. Her debut collection I.V. Poems was just released and is receiving strong reviews. Lucy received a Master of Arts in Liberal Studies with honors from Wesleyan University, receiving the University’s coveted Rulewater Prize for her thesis project on women’s basketball. She is a member of the Authors Guild, Romance Writers of America, Rainbow Romance Writers, Golden Crown Literary Society, and the Lesbian Authors Guild. She is at work now on several feature film scripts and two new novels. She resides with her wife of 16 years in Connecticut and in Provincetown, MA along with their beloved pets.

I worked as a sports writer covering the WNBA and saw first hand the inner workings of the league. I also grew up playing basketball in both high school and college. The sport is near to my heart and I always wondered what would happen if a player and a referee fell in love.

Kat Schaefer feels the familiar acceleration as the force pulls her body deeper into the seat. Here she sits in another airplane during another takeoff to another city. She missed her first flight after yet another time-consuming TSA search simply because her ticket was randomly coded, but finally, she can relax. As she prepares to lean back and take a long-awaited nap, Kat glimpses the hand of the older woman next to her and notices she is clutching the armrest.
“I never get used to this,” the nervous woman says to Kat almost apologetically.
“It’s okay. It will get better in a few minutes once we hit altitude.”
“I really hate to fly. I prefer to be in a drug-induced stupor but my daughter wouldn’t let me take anything since I’m flying alone.”
Kat smiles politely but doesn’t feel like talking. She raises the window shade and squints outside. She can feel the Phoenix heat pulsing through the thick double-paned glass. There isn’t anything more scorching than Phoenix in late July other than a hot frying pan. After a look into the haze, she closes the window shade and closes her eyes. Trying to adjust her long legs in the cramped space isn’t easy; at five foot ten inches tall, Kat has never been completely comfortable in a coach seat. With long, straight black hair, steel-gray eyes, and an athletic, tall build, Kat Schaefer is strikingly beautiful and usually, both men and women turn their heads when she walks by. They also tend to talk to her on planes and in airports when she’d much rather remain anonymous.
For a split second, Kat can’t even remember what city she is headed to, but then she remembers she’s on her way home. She worked a game in Phoenix last night and a game in Minneapolis the night before that. She remembers that much. Professional officials in the Women’s National Basketball Association, or WNBA aren’t supposed to have favorites, but Kat loves working Diana Taurasi’s games. Sometimes the games run into each other, with little differentiating one night from another, but when Taurasi plays, she, at least, makes things interesting; her bubbly and highly competitive personality helps break up the monotony of the game. Last night was a close game, but thankfully, it was won by the play on the court and not by an official’s call. Now, Kat is headed home for few days off. She prefers traveling from hotel to hotel than spending any time in her home, but sometimes going home isn’t something she can opt out of.

Be the first to review “Personal Foul by Lucy J. Madison” Cancel reply