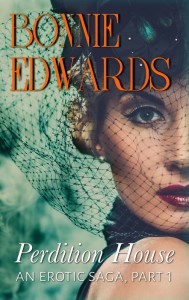 Welcome to Perdition House: a house of sin, secrets and seduction.

When Faye Grantham inherits Perdition House, her family’s secret shame, she expects to sell the property for millions and marry her long time fiancé.

But the spirits who still reside in the mansion have other ideas. Trapped in the bordello, the women who lived and worked there wait to tell their stories to Faye.

The “girls” don’t just hang around waiting. They control Faye’s libido, influence her decisions and drive her into the arms of two very different men.

Liam Watson wears comfort like most men wear cologne. With an interest in adventurous sex, he’s more man than he first seems.

Mark McLeod is a strong, decisive businessman who was not meant to be more than a hot one-night stand. But Mark is in no hurry to end their liaison, and hopes to continue Faye’s lessons in sensuality.

As Faye becomes enthralled with the mansion, she’s embroiled in a life-changing situation that has her re-examining her engagement, her business decisions, and her beliefs about herself.

As the spirits reveal themselves one by one, Faye learns their stories: how they came to Perdition House, why they joined the women there and some of the secrets that only a high-class bordello could hold.

What better place to set that idea than a haunted brothel inhabited by the spirits of the women who worked, lived and fell in love there?