You are here: Products Peninah’s Passion by Andy Lang 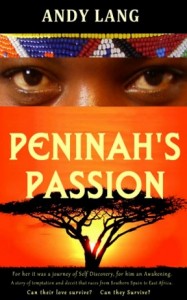 Everyone has a past…

But what happens when you hide that past from your husband?

What happens when you deny your deepest desires?

What happens when those desires are revealed by an assassin, and you find yourself pursued by a ruthless drugs cartel across two continents while trying to pick up the pieces?

Find out in Peninah’s Passion, a tale of denial, deceit, fetish and awakening.

For her, it was a journey of self-discovery.

For him, an awakening.

Alex Longdon is a disgraced financial advisor. After his comfortable life has shattered to pieces, the only reason he has to continue is his young and beautiful Kenyan wife, Peninah.

Pursued by a cartel bent on their elimination and running from a dangerous knowledge, they find themselves chased across two continents facing mortal danger, deceit and temptation. For Peninah this is the beginning of a journey of self-discovery, as she slowly begins to understand her own desires and fetishes. For Alex, the journey is an awakening as he begins to understand his wife’s deepest needs.

Maybe they can save their love… but can they save themselves?

He currently lives with his wife and their young son in Uganda.

The idea came to me many years ago, before I hade even considered writing as a career. I worked in a huge apartment complex in northern Spain as entertainments manager, and the company that operated the bar and restaurant always struck me as a little shady. That is where the story began, back in those days I had decided to call any book that I ever got around to writing Jaded (the main female protagonist being Jade). Years passed, and eventually I found time to begin writing while I was living in Kenya, from that point I developed the plot, but swapped Jade for Peninah (my wifes name) and added an interracial twist, basing the action in Spain and East Africa. So there you have it… an idea born in the 90’s but finally delivered with the help of my wife 20 years later.