You are here: Products Patrick’s Journey by Roy Humphreys 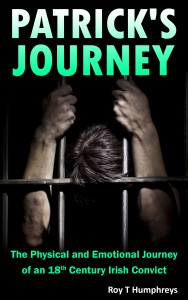 It’s springtime and 17 year old Patrick Rourke has everything to live for. He’s young, strong and healthy, has a loving family and has won the affection of his sweetheart Catherine. Unfortunately, Patrick is also quick tempered and has an unfortunate tendency to use his fists to settle disputes. A relatively minor confrontation with the occupying British Redcoats escalates and Patrick’s world is torn apart as he becomes a pawn in the political aspirations of the United Irishmen and suffers the wrath of the British dominated Irish penal system.

With everything he holds dear seemingly lost Patrick finds himself thrust into an emotional and physical journey that will see him plummet into the depths of rage and despair as he is transported on the convict ship Boddington to the penal colony of New South Wales.

Will he ever see his family or his beloved Ireland again ? And Catherine – all his future revolved around Catherine – what can he hope to offer her now ?

Patrick’s Journey is an historical fiction novel based on the real life history of one of Australia’s early Irish convict settlers. It could be described as simply an entertaining “romance/adventure” novel, but the story goes deeper than that. The “Journey” in the story is twofold, there is the physical journey from one mode of existence in Ireland to a completely different one in Australia and the emotional/spiritual journey that accompanies such drastic changes in Patrick’s world.

Patrick’s Journey is based on the real life story of his great grandfather, 6 generations back, that he heard about at a family reunion many years ago. It was a story that he felt needed telling, but never had the time until retirement came in 2012.

The real life story of Patrick had always captivated me whenever I head it discussed at family reunions or read about it. There were already enough historic articles published about Patrick and his story was like an adventure/romance novel anyway, it just needed putting into print.

There were many distractions competing for his attention, but he made straight for the side of the arena where he had an uninterrupted view of the dance. It wasn’t so much the dance, itself, that held Patrick’s interest, it was a dark haired, petite beauty who swirled, stepped and smiled her way along the rows of other participants. Catherine Byrnes was certainly no stranger to Patrick, he had known her since they were children and had courted her seriously for more than eighteen months now. She certainly gave every indication that his attentions were welcomed and, yet, Patrick had no confidence in publicly showing her affection or even participating in popular mixed activities such as the dance.
“Whatcha looking at Patty Boy?” The familiar voice of Shaun McSweeny startled Patrick and left him a little annoyed that Shaun and his constant companion Bobby Taggart had been able to approach him unawares, while he was so obviously engrossed with Catherine.
“Nothing, really, just watching the dance,” Patrick replied, trying to sound aloof, while desperately thinking of a way of changing the subject. “Sure, Patty, sure,” added Bobby, “and a right pretty little nothing at that, eh?”
Shaun could see that Bobby was starting to tread on dangerous ground, everyone knew of Patrick’s quick temper and formidable ability with his fists, so he quickly jumped in with a more conciliatory, “Look, Pat, why don’t you dance with Catherine? You know she would like that.”
“Dancing’s never been my strong point” Patrick responded, relieved now that his friends weren’t going to put him through a prolonged taunting session. When he was younger, Patrick always tried to hide his feelings for Catherine and hated it when his friends took the micky out of him about it. However, as he grew older, stronger and more confident in his manhood, he was reasonably comfortable discussing his feelings with close friends such as Shaun and Bobby – as long as they didn’t go too far. Besides, there were other pressing matters, particularly relating to the English occupiers of his country, for which Patrick knew he needed the support of close friends.
The dance concluded and, after the obligatory bows and courtesy’s, Catherine joined her friends Rebecca and Eleanor and then made their way across to meet Patrick and his friends.