You are here: Products Passion Patrol 1 by Emma Calin 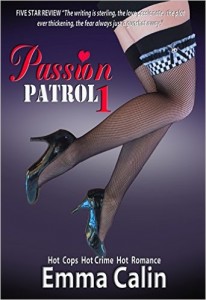 Emma currently lives in busy southern Britain but spends much of her time writing in a very tranquil part of south west France. Her ‘recomposed’ family includes 7 children and 4 grandchildren. She loves being outdoors and is a keen cyclist – particularly on her tandem with her partner on the quiet French roads. She enjoys cooking and experimenting with new recipes and plays the trombone, but not usually while baking.

The Passion Patrol Series currently has two full length novels, a third is on the way. There is also a companion cookery book for the second novel, but that’s more of a side-dish.