You are here: Products Party Like a Plutocrat by Gustav Jorgenson 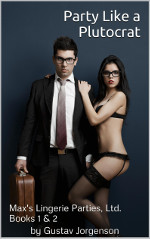 Party Like a Plutocrat finishes the story begun in Max’s Lingerie Parties, Ltd. This edition includes the content from that story to form a complete, novel length piece.

Self styled “serial-entrepreneur” Max Levine has failed at every business he undertook. When Max comes up with the idea of selling lingerie to men at tupperware style parties, he finds that he doesn’t have cash to hire models. Your wife has been best friends with Max’s wife since college and the two upper-middle-class, professional women reluctantly agree to help Max out and model lingerie for a group of strange men. However when billionaire Reginald Witherspoon shows up, the playful exhibitionism that spiced up your dull love lives quickly escalates out of control.

The wives are whisked away to New York City to party with Witherspoon’s entourage and billionaire friends. They are pressed into service to fulfill the hedonistic desires of powerful men, sometimes in public. You and Max rush off to NYC in an attempt to save your marriage, but witness gut wrenching scenes of infidelity that are strangely arousing.

Older women often feel that men are paying more attention to younger women, so seeking attention from other men might be a way for them to build their self-esteem. Of course feminism dictates that a woman base her self-esteem on her own worth, and that is a noble and modern aspiration. But on some level, we all get a boost from the interest of the opposite sex. (This is more pronounced in heterosexuals admittedly.) A loving husband understands these urges in his wife, but these stories delve into what happens as that attention seeking becomes a slippery slope and descends into adultery before the husband’s very eyes.

As the guests arrive and the drinks get poured, you notice your wife loosening up. The conversations are starting to flow more smoothly as well.
The sight of your wife showing these strange men her body is incredibly arousing. They don’t bother trying to hid the fact that they are looking at her body and even remark on it.
“Wow, this nightgown is very flattering,” says one guy running his eyes up and down Erin’s body as you join the small group of men that has gathered around your wife.
“Just let me know if you are interested, and I can take your order down on my phone,” says Max casually.
“Yeah, I think my wife would look good in this,” says the guys keeping his eyes on your wife. “Would you mind turning around, dear,” he asks her gently.
“Not at all,” she says, turning around and bending over slightly to present her ass to him flirtatiously. “How’s this?” she asks glancing back at him over her shoulder and batting her eyelashes.
“Hmm, yes, quite,” says a gentleman in the group, boldly looking her up and down. He looks familiar and you realize that he’s the real estate mogul, Witherspoon. “But can we see the nightgown without the bra and panties?” he asks casually. He is perfectly polite, but it sounds more like an order than a request. He uses the tone of a man used to getting what he wants.
This request takes your wife by surprise and her coquettish air falters slightly. Your wife glances at you involuntarily and then catches herself. The men look on with interest as Erin nervously rubs the tops of her sweet, milky white thighs as she considers her options. After a moment, she gulps and forces a smile. “Um… Ok… I mean, sure, why not? I will be right back, gentlemen.” She shoots you a quick glance of concern and then departs to go remove her under garments.
Your stomach flips uncomfortably at this turn of events and you take another drink to steady yourself. You understood that that your wife would be revealing her assets, and you knew that would be hard to watch. But you didn’t realize that she would be forced to comply with requests like this in order to demonstrate the merchandise.
“That’s a fine looking model you found there, Max. What agency did you use?” Witherspoon asks as he enjoys his single-malt scotch.
“Trade secret, my good man, trade secret. That’s for me and my partners to know,” Max responds smoothly.
“Heh-heh. That’s a good one,” laughs Witherspoon with a twinkle in his eye. “Are you looking for more partners, then?”
“We are always open to talking to people who might be interested in taking a capital stake in this venture,” responds Max judiciously.
Witherspoon just snorts condescendingly in response, “Oh, I’m sure you are.”
Conversation ceases as your wife haltingly returns to the group. She is wearing the same transparent nightgown, but has removed her bra and panties, and her confidence seems to have gone along with them. She vacillates between crossing her arms over her chest to hide her nipples and crossing her hands to cover her crotch.
“Why don’t be nervous, darling,” says Witherspoon with a familiar tone that annoys you. “You look simply marvelous.”
“Why, thank you,” says your wife meekly, putting her arms to her sides. “Do… do you like this piece?” she asks bashfully.
“I do,” he says rubbing his hands together as he runs his eyes up and down your wife’s body.
Her nipples are discernible through the thin translucent material of the nightgown and they are clearly erect. You can also make out the dark patch of her pubic hair, which is just barely covered by the nightgown. Your cock grow painfully stiff as you notice the men around you gazing hungrily at your wife’s body. You are surprised to see Max’s mouth hanging open as he checks her out as well.
“I like how the hem just barely covers her crotch,” says one fellow, licking his lips unconsciously. “That’s very provocative.”
“Yes, would you mind lifting your arms above your head, dear?” commands Witherspoon gazing at your woman’s bush expectantly.
“Um…but that…” she stammers, as Witherspoon just waits patiently with raised eyebrows. She can’t match his stare and finally concedes. “Well, ok,” she mumbles, cheeks flushed with embarrassment. She touches her lovely, bare thighs again unconsciously, realizing that all the men are gazing at her pelvis in anticipation. She shoots you just the briefest glances of discomfort and then raises her arms reluctantly so that the hem of her gown rises to fully expose her dark full bush.
“Peek-a-boo,” laughs one of the guys in the group, and you have to restrain the urge to strike him.
Your wife chuckles and lowers her arms quickly, her cheeks flushed a charming pink.
“That’s a nice effect, do it again,” says the first fellow, adjusting his hard-on unselfconsciously. You aren’t sure how much more of this you can take. You consider walking away for a moment, but you can’t bring yourself to do it.
“Ugh… well, you boys, like that huh?” asks your wife with resignation, looking at you helplessly. “You see, your wife or girlfriend can reveal as much or as little as she wants just by shrugging her shoulders.” She demonstrates by raising her shoulders slowly which raises the hem of her nightgown inch by inch to reveal her bush. She repeats this a couple of times to various “oohs” and “ahhs” from the group. Her eyes are bright with excitement now and you can tell that she is moving beyond embarrassment into arousal. “Peek-a-boo,” she says jokingly as she shows and then covers her crotch. The sexual desire of the men around you watching this is palpable, and your heart is racing.