You are here: Products Pam of Babylon by Suzanne Jenkins 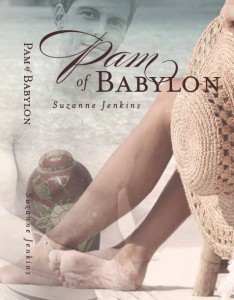 Pam of Babylon by Suzanne Jenkins

For Long Islander Pam Smith, keeping house and staying beautiful dominate her daily routine as she awaits the return of her husband, Jack, every Friday evening. When he suffers a fatal heart attack on the train home from Manhattan, Pam’s exquisitely arranged life is catapulted into turmoil as she is forced to face the realization that her marriage is nothing more than a black hole plagued with cruel infidelity, abuse, and sexual deviance. Witness Pam as she graciously and gracefully accepts the foul world her husband’s “other life” forces on her previously immaculate existence. Come along for the ride of your life as you ask yourself this one question. How well do I know my husband?

Suzanne Jenkins is the author of the Pam of Babylon series, The Greektown Trilogy. Alice’s Summertime Adventure, The Savant of Chelsea and Atlas of Women. Her short story Vapor will appear in Willow Review, Spring 2013. A retired operating room nurse after living in New Jersey, USA for thirty years, she’s now a resident of the west Michigan lakeshore where she lives in the woods with her husband, dogs and sheep.

I had a fantasy about what I would do if I discovered my husband had been unfaithful and the idea that I could be forgiving to the other woman loomed large. I know I couldn’t do it, but Pam could. I took it to the limits of a human’s capacity for forgiveness.