You are here: Products Out of The Wild by Brenda Manson 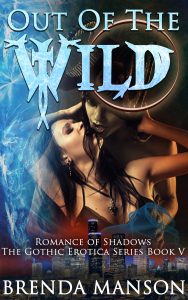 Out of The Wild by Brenda Manson

Asphalt and neon embrace Nora and Kiernan as they become creatures of the city’s night! The couple find the darkness of the city tantalizing, as they indulge such dark, forbidden pleasures

A rather accommodating hotel provides ample sustenance and sensual pleasure, so much so, that the two become indistinguishable. The rush of sex and blood is at a new high for the passionate duo!

An old… an ancient evil soon pays them a surprise visit, with a warning…’there is an order, a way to be as a creature of the night…this they must respect…or else’!

Forever rebellious, the couple does the unthinkable…they declare themselves husband and wife! Can Nora and Kiernan suffer the consequences of their forbidden action? Will they find a renewed strength in their unholy union???

Love of the Genre

Chapter One
Nightmare Realm
Living with the Wendigo had proven to be an interesting and horrifying experience; her implicit lack of self control around humans made Nora and Kiernan’s behavior look like that of a lambs in comparison. Still, there was a beauty to the way she moved. Her body was compiled of so many random parts, part animal, part human, and all demon; Nora couldn’t help but admire her. Dakota did not need to possess humans; she had speed and strength that surpassed the laws of physics, and a shriek that would paralyze even the most daring wonderer. Since Nora and Kiernan were not human, Dakota didn’t possess the ravenous desire to eat them, and there in they had found a stable, but awkward compromise, if not a friendship. Besides, Dakota informed them that demon flesh tastes like rotted meat anyway.
The Wendigo had introduced Kiernan to demons she knew of in the area, in order to further his study of the demon code and what might be causing Nora’s nightmares. Most demons agreed that it was fairly common for a new demon to have a transition period, which may include nightmares; but what concerned Kiernan was a rather fascinating demon named Adramelech, an ancient Hebrew name with an attached legend that he was once a high chancellor of hell. In the demon world, there was always a price for information and hospitality, and Adramelech had requested to watch Nora and Kiernan have sex, since this was no longer something he was capable of.
This demon had the appearance of a large arachnid. It was black and furry; its size was that of a sports car. As though its appearance wasn’t unnerving enough, the way it communicated was worse. It communicated telepathically, but whomever it was speaking to felt as though they had tiny spiders climbing through their veins. This demon had been deformed for an eternity due to an indiscretion; so he was somewhat familiar with the demon justice system. The moment Nora and Kiernan removed their leather pants, Adramelech inserted his two front legs into each of their backsides and pushed them together. Although Nora could feel Kiernan and Adramelech both coursing with in her, the feeling was still similar to being a puppet; she could feel what was happening, she was aware of it, but there was nothing she could do to stop it. Nora clung to Kiernan, gasping deeply while the waves of after shock hit her after he climaxed.
Adramelech released the two and used his mandible to clean himself as Nora and Kiernan got dressed. The arachnid-demon mentioned an odd piece of demon lore which stated that a peek into the nightmare realm was a sign of bad deeds and impending repercussions. This is called the Curse of Dreams… being assigned to a nightmare realm that is supposedly a demon’s equivalent of hell. It is a miserable place where the torture is never fun and the demon’s thirst for lust or carnage is never fully sated. Essentially, the demon spends an eternity starving to death. In short, this experience would likely turn Nora mad.
Mental insanity to this degree in demons is the same as an extreme case of dementia in humans. Except, when the demons are unconscious of their surroundings, it’s because their mind is literally somewhere else, in a dimension so terrifying that even a demon would huddle in the corner, arms around its knees, rocking itself.
Other punishments for a demon included the Curse of Empathy; the Curse of Self-Cannibalism…the excruciating pain of a demon devouring itself; and the Curse of Dismemberment or tearing a demon apart and scattering the pieces for all eternity. If inflicted with the Curse of Empathy, the demon would be able to feel every bit of pain they had ever inflicted upon a human being and remember the pain they had felt as a human, it was controversial as to whether or not the demon’s soul was actually returned in this instance. Any of the four consequences would spell disaster for Kiernan and Nora, and her pride would not allow her to keep him as a caretaker if she was further incapacitated.